I just compiled a list of a few preprints and papers that recently came out in support of hyperspectral work and its relation to either compressive sensing or advanced matrix factorization. Without further ado: 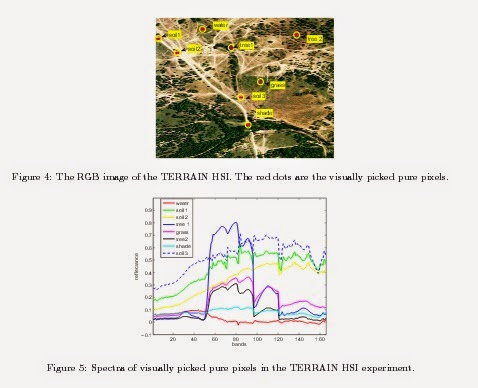 This paper considers a recently emerged hyperspectral unmixing formulation based on sparse regression of a self-dictionary multiple measurement vector (SD-MMV) model, wherein the measured hyperspectral pixels are used as the dictionary. Operating under the pure pixel assumption, this SD-MMV formalism is special in enabling simultaneous identification of the endmember spectral signatures and the number of endmembers. Previous SD-MMV studies mainly focus on convex relaxations. In this study, we explore the alternative of greedy pursuit, which generally provides efficient and simple algorithms. In particular, we design a greedy SD-MMV algorithm using simultaneous orthogonal matching pursuit. Intriguingly, the proposed greedy algorithm is shown to be closely related to some existing pure pixel search algorithms, especially, the successive projection algorithm (SPA). Thus, a link between SD-MMV and pure pixel search is revealed. We then perform exact recovery analyses, and prove that the proposed greedy algorithm is robust to noise---including its identification of the (unknown) number of endmembers---under a sufficiently low noise level. The identification performance of the proposed greedy algorithm is demonstrated through both synthetic and real-data experiments.


This paper presents a variational based approach to fusing hyperspectral and multispectral images. The fusion process is formulated as an inverse problem whose solution is the target image assumed to live in a much lower dimensional subspace. A sparse regularization term is carefully designed, relying on a decomposition of the scene on a set of dictionaries. The dictionary atoms and the corresponding supports of active coding coefficients are learned from the observed images. Then, conditionally on these dictionaries and supports, the fusion problem is solved via alternating optimization with respect to the target image (using the alternating direction method of multipliers) and the coding coefficients. Simulation results demonstrate the efficiency of the proposed algorithm when compared with the state-of-the-art fusion methods.

Hyperspectral unmixing (HU) plays a fundamental role in a wide range of hyperspectral applications. It is still challenging due to the common presence of outlier channels and the large solution space. To address the above two issues, we propose a novel model by emphasizing both robust representation and learning-based sparsity. Specifically, we apply the $\ell_{2,1}$-norm to measure the representation error, preventing outlier channels from dominating our objective. In this way, the side effects of outlier channels are greatly relieved. Besides, we observe that the mixed level of each pixel varies over image grids. Based on this observation, we exploit a learning-based sparsity method to simultaneously learn the HU results and a sparse guidance map. Via this guidance map, the sparsity constraint in the $\ell_{p}\!\left(\!0\!<\! p\!\leq\!1\right)$-norm is adaptively imposed according to the learnt mixed level of each pixel. Compared with state-of-the-art methods, our model is better suited to the real situation, thus expected to achieve better HU results. The resulted objective is highly non-convex and non-smooth, and so it is hard to optimize. As a profound theoretical contribution, we propose an efficient algorithm to solve it. Meanwhile, the convergence proof and the computational complexity analysis are systematically provided. Extensive evaluations verify that our method is highly promising for the HU task---it achieves very accurate guidance maps and much better HU results compared with state-of-the-art methods.

This paper presents a conceptually simple, robust, yet highly effective approach to both texture classification and material categorization. The proposed system is composed of three components: (1) local, highly discriminative, and robust features based on sorted random projections, built on the universal and information-preserving properties of random projections; (2) an effective Bag-of-Words (BoW) global model; and (3) a novel approach for combining multiple features in a Support Vector Machine (SVM) classifier. The proposed approach encompasses the simplicity, broad applicability, and efficiency of the three methods. We have tested the proposed approach on eight popular texture databases, including FMD, a highly challenging materials database. We compare our method with thirteen recent stateof- the-art methods, and the experimental results show that our texture classification system yields the best classification rates of which we are aware of 99.37% for CUReT, 97.16% for Brodatz, 99.30% for UMD and 99.29% for KTH-TIPS. Moreover, the proposed approach significantly outperforms the current state-of-the-art approach in materials categorization, with an improvement to classification accuracy of 67%.

Many powerful pansharpening approaches exploit the functional relation between the fusion of PANchromatic (PAN) and MultiSpectral (MS) images. To this purpose, the modulation transfer function of the MS sensor is typically used, being easily approximated as a Gaussian filter whose analytic expression is fully specified by the sensor gain at the Nyquist frequency. However, this characterization is often inadequate in practice. In this paper, we develop an algorithm for estimating the relation between PAN and MS images directly from the available data through an efficient optimization procedure. The effectiveness of the approach is validated both on a reduced scale data set generated by degrading images acquired by the IKONOS sensor and on full-scale data consisting of images collected by the QuickBird sensor. In the first case, the proposed method achieves performances very similar to that of the algorithm that relies upon the full knowledge of the degrading filter. In the second, it is shown to outperform several very credited state-of-the-art approaches for the extraction of the details used in the current literature.

Liked this entry ? subscribe to Nuit Blanche's feed, there's more where that came from. You can also subscribe to Nuit Blanche by Email, explore the Big Picture in Compressive Sensing or the Matrix Factorization Jungle and join the conversations on compressive sensing, advanced matrix factorization and calibration issues on Linkedin.
By Igor at 10/01/2014 03:30:00 AM