On the Effective Measure of Dimension in the Analysis Cosparse Model 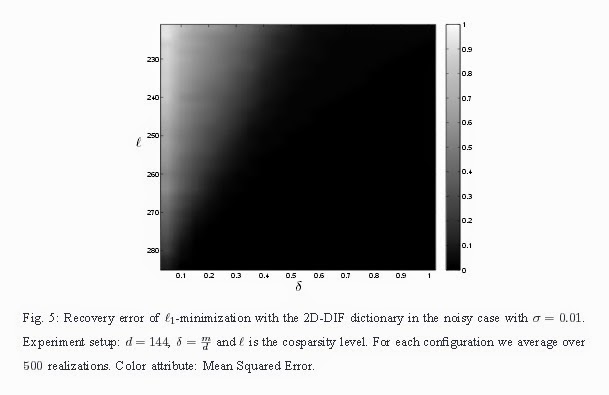 On the Effective Measure of Dimension in the Analysis Cosparse Model by Raja Giryes, Yaniv Plan, Roman Vershynin

Many applications have benefited remarkably from low-dimensional models in the recent decade. The fact that many signals, though high dimensional, are intrinsically low dimensional has given the possibility to recover them stably from a relatively small number of their measurements. For example, in compressed sensing with the standard (synthesis) sparsity prior and in matrix completion, the number of measurements needed is proportional (up to a logarithmic factor) to the signal's manifold dimension.
Recently, a new natural low-dimensional signal model has been proposed: the cosparse analysis prior. In the noiseless case, it is possible to recover signals from this model, using a combinatorial search, from a number of measurements proportional to the signal's manifold dimension. However, if we ask for stability to noise or an efficient (polynomial complexity) solver, all the existing results demand a number of measurements which is far removed from the manifold dimension, sometimes far greater. Thus, it is natural to ask whether this gap is a deficiency of the theory and the solvers, or if there exists a real barrier in recovering the cosparse signals by relying only on their manifold dimension. In this work we show that the latter is true both in theory and in simulations. This gives a practical counter-example to the growing literature on compressed acquisition of signals based on manifold dimension.

Thanks for Laurent for mentioning this on Twitter. But as I said there I did not realize cosparsity was supposed to allow us to go down to the level of the dimension of the manifold.
Join the CompressiveSensing subreddit or the Google+ Community and post there !

Liked this entry ? subscribe to Nuit Blanche's feed, there's more where that came from. You can also subscribe to Nuit Blanche by Email, explore the Big Picture in Compressive Sensing or the Matrix Factorization Jungle and join the conversations on compressive sensing, advanced matrix factorization and calibration issues on Linkedin.
By Igor at 10/13/2014 12:00:00 AM