Here are some applications of compressive sensing that I have gathered recently (I am sure I am missing many): 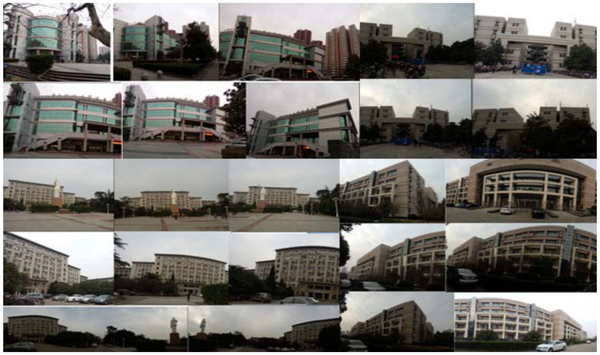 Mobile Visual Location Recognition (MVLR) has attracted a lot of researchers' attention in the past few years. Existing MVLR applications commonly use Query-by-Example (QBE) based image retrieval principle to fulfill the location recognition task. However, the QBE framework is not reliable enough due to the variations in the capture conditions and viewpoint changes between the query image and the database images. To solve the above problem, we make following contributions to the design of a panorama based on-device MVLR system. Firstly, we design a heading (from digital compass) aware BOF (Bag-of-features) model to generate the descriptors of panoramic images. Our approach fully considers the characteristics of the panoramic images and can facilitate the panorama based on-device MVLR to a large degree. Secondly, to search high dimensional visual descriptors directly on mobile devices, we propose an effective bilinear compressed sensing based encoding method. While being fast and accurate enough for on-device implementation, our algorithm can also reduce the memory usage of projection matrix significantly. Thirdly, we also release a panoramas database as well as a set of test panoramic quires which can be used as a new benchmark to facilitate further research in the area. Experimental results prove the effectiveness of the proposed methods for on-device MVLR applications.

Compressive displays are an emerging technology exploring the co-design of new optical device configurations and compressive computation. Previously, research has shown how to improve the dynamic range of displays and facilitate high-quality light field or glasses-free 3D image synthesis. In this paper, we introduce a new multi-mode compressive display architecture that supports switching between 3D and high dynamic range (HDR) modes as well as a new super-resolution mode. The proposed hardware consists of readily-available components and is driven by a novel splitting algorithm that computes the pixel states from a target high-resolution image. In effect, the display pixels present a compressed representation of the target image that is perceived as a single, high resolution image.

We propose and demonstrate a novel a compressive sensing swept source optical coherence tomography (SSOCT) system that enables high speed images to be taken while maintaining the high resolution offered from a large bandwidth sweep. Conventional SSOCT systems sweep the optical frequency of a laser ω(t) to determine the depth of the reflectors at a given lateral location. A scatterer located at delay τ appears as a sinusoid cos (ω(t)τ ) at the photodetector. The finite optical chirp rate and the speed of analog to digital and digital to analog converters limit the acquisition rate of an axial scan. The proposed acquisition modality enables much faster image acquisition rates by interrogating the beat signal at randomly selected optical frequencies while preserving resolution and depth of field. The system utilizes a randomly accessible laser, a modulated grating Y-branch laser, to sample the interference pattern from a scene at randomly selected optical frequencies over an optical bandwidth of 5 THz , corresponding to a resolution of 30 μm in air. The depth profile is then reconstructed using an l1 minimization algorithm with a LASSO constraint. Signal-dependent noise sources, shot noise and phase noise, are analyzed and taken into consideration during the recovery. Redundant dictionaries are used to improve the reconstruction of the depth profile. A compression by a factor of 10 for sparse targets up to a depth of 15 mm in noisy environments is shown.

Source optimization (SO) has emerged as a key technique for improving lithographic imaging over a range of process variations. Current SO approaches are pixel-based, where the source pattern is designed by solving a quadratic optimization problem using gradient-based algorithms or solving a linear programming problem. Most of these methods, however, are either computational intensive or result in a process window (PW) that may be further extended. This paper applies the rich theory of compressive sensing (CS) to develop an efficient and robust SO method. In order to accelerate the SO design, the source optimization is formulated as an underdetermined linear problem, where the number of equations can be much less than the source variables. Assuming the source pattern is a sparse pattern on a certain basis, the SO problem is transformed into a l1-norm image reconstruction problem based on CS theory. The linearized Bregman algorithm is applied to synthesize the sparse optimal source pattern on a representation basis, which effectively improves the source manufacturability. It is shown that the proposed linear SO formulation is more effective for improving the contrast of the aerial image than the traditional quadratic formulation. The proposed SO method shows that sparse-regularization in inverse lithography can indeed extend the PW of lithography systems. A set of simulations and analysis demonstrate the superiority of the proposed SO method over the traditional approaches.

We propose a method to improve the quality of the reconstructed images based on compressive sensing principles. The pseudo-inverse matrix and the total variation minimization algorithms are combined to reduce the sampling number of the computer generated hologram. Numerical simulations are performed and the results indicate that the peak signal to noise ratio is increased and the sampling ratio is decreased at the same time for holographic display.

Single molecule fitting-based superresolution microscopy achieves sub-diffraction-limit image resolution but suffers from a need for long acquisition times to gather enough molecules. Several methods have recently been developed that analyze high molecule density images but most are only applicable to two dimensions. In this study, we implemented a high-density superresolution localization algorithm based on compressed sensing and a biplane approach that provides three-dimensional information about molecules, achieving super-resolution imaging at higher molecule densities than those achieved using the conventional single molecule fitting method.