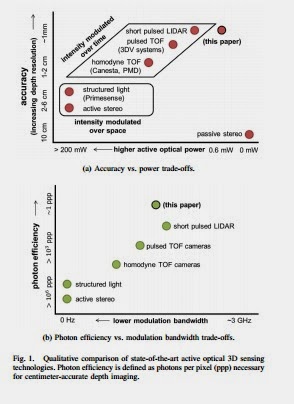 The following technology uses a Maximum Likelihood formulation with a convex penalty term and a Rank Order Mean to remove impulsive noise and make the cost function convex as a result. This is not vanilla compressive sensing but it sure looks like a very involved reconstruction process beyond generic imaging systems.

Capturing depth and reflectivity images at low light levels from active illumination of a scene has wide-ranging applications. Conventionally, even with single-photon detectors, hundreds of photon detections are needed at each pixel to mitigate Poisson noise. We develop a robust method for estimating depth and reflectivity using on the order of 1 detected photon per pixel averaged over the scene. Our computational imager combines physically accurate single-photon counting statistics with exploitation of the spatial correlations present in real-world reflectivity and 3D structure. Experiments conducted in the presence of strong background light demonstrate that our computational imager is able to accurately recover scene depth and reflectivity, while traditional maximum-likelihood based imaging methods lead to estimates that are highly noisy. Our framework increases photon efficiency 100-fold over traditional processing and also improves, somewhat, upon first-photon imaging under a total acquisition time constraint in raster-scanned operation. Thus our new imager will be useful for rapid, low-power, and noise-tolerant active optical imaging, and its fixed dwell time will facilitate parallelization through use of a detector array.

The next system is closer to a vanilla compressive sensing system I believe. 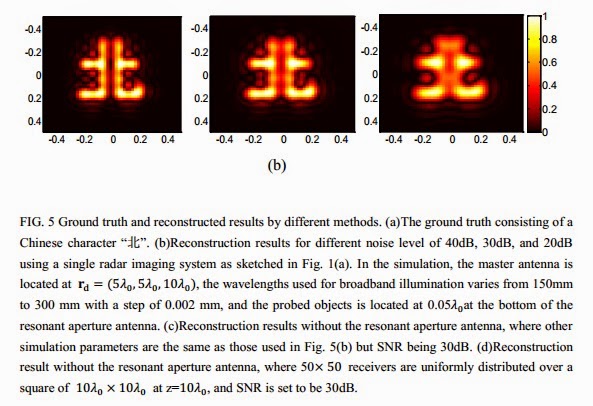 Far-field imaging beyond the diffraction limit is a long sought-after goal in various imaging applications, which requires usually an array of antennas or mechanical scanning. Here, we present an alternative and novel concept for this challenging problem: a single radar system consisting of a spatial-temporal resonant aperture antenna (referred to as the slavery antenna) and a broadband horn antenna (termed the master antenna). We theoretically demonstrate that such resonant aperture antenna is responsible for converting parts of the evanescent waves into propagating waves, and delivering them to the far-field. We also demonstrate that there are three basic requirements on the proposed subwavelength imaging strategy: the strong spatial-temporal dispersive aperture, the near-field coupling, and the temporal (or broadband) illumination. Such imaging concept of a single radar provides unique ability to produce real-time data when an object is illuminated by broadband electromagnetic waves, which lifts up the harsh requirements such as near-field scanning, mechanical scanning or antenna arrays remarkably. We expect that this imaging methodology will make breakthroughs in super-resolution imaging in the microwave, terahertz, optical, and ultrasound regimes.