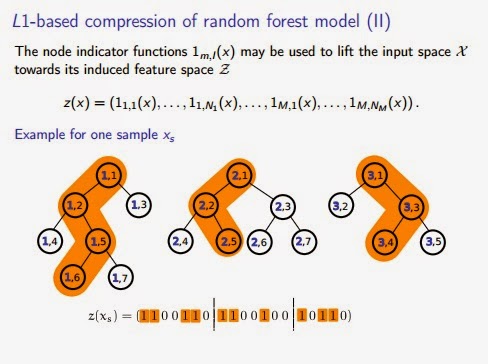 If anything comes out of Kaggle competitions, it is that Random Forests [4,5,6], while not consistently giving the best scores, have pretty good results most of the times.

Random Forest [4] typically is a technique of supervised learning in Machine Learning parlance.

Recently, some folks have made some sorts of connection with these techniques and compressive sensing or Johnson-Lindenstrauss. In one of the earliest case [1], while not in a random forest setting, the authors used the sparsity of the positive label within the larger label set to perform classification on the compressed labels and used L1 solvers to re-identify the actual labels. In [2], the authors adapted this technique to train random trees to randomized label features. In [3], the authors took a different approach to random forests by noting that random trees were a mapping from features into a new, very sparse, feature space. They use this node sparsity in the new feature space to compress trees and reduce the memory size of the entire forest. This is great, but what if randomization could be used to build compressed forests from the get go ? Not much has been done it seems on that front. Aside from the random picking of features in decision trees, Leo Breiman's original paper on Random Forest [4] contained another interesting approach reminiscent of random projections used in compressive sensing:

At a given node, L variables are randomly selected and added together with coefficients that are uniform random numbers on [-1,1]. F linear combinations are generated, and then a search is made over these for the best split. This procedure is called Forest-RC...."

More on that later.