Two weeks ago, I was talking about the issue that in no other engineering fields, one would have been allowed to go on for so long without some sorts risk mitigation strategy. As it stands, it looks like there was none to speak about:

Some of the real engineers who design weapons of mass destruction (such is the term used by Warren Buffett about derivatives) do so knowing that they deal with extremely dangerous elements and specifically understand what chain reactions are. And when several actors are in possession of them, they generally enter in some type of risk mitigation process called treaties. Even treaties are not left to their own device. The keyword here is : Trust But Verify. In fact, much sophistication goes into the verify part. It looks as though most actors of the financial system have not gotten to that stage nor even have an understanding of the underlying physics. The words of Amicus in the comment section of Tyler Cowen's entry reinforce my view on that matter (italic and bold are mine):

While the run-up in sub-prime lending itself ($700 billion) was not desperately remarkable, it seems, he discounted the exponential growth in derivatives, many related to mortgage issuance, because the early 1990s warnings over derivatives expansion ... had proved false, to date. Sadly, making that generalization was a mistake.

His key ideological flavor, that loan officers know the risks better than any regulator ever could do, was ... interesting, but off the mark, for the current crisis. It's possible that the risks to the system, which no one party could judged themselves, arguably (knowing their part only), multiplied, rather than getting spread around.

For instance, Goldman was "into" AIG for a reported, eye-popping $20 billion (they deny that much). Did they know how much everyone else was into AIG? Only a regulator could know, or identify the weakest link in a chain, maybe. Whatever the case, by the time it came to shut down AIG, because of old-fahsioned mis-management, their counterparties appear not to have been ... fully apprised or reserved.

I am very much afraid that this crisis will put the wrong emphasis on having less financial engineering and more usual empirical laissez-faire to an already dramatic situation when in fact, we really need smart folks on the regulation side of things. Understanding derivatives may be interesting, but more challenges lie in unmasking most of the unknowns (Knowing what you don't know, where's the data Mr. Paulson). 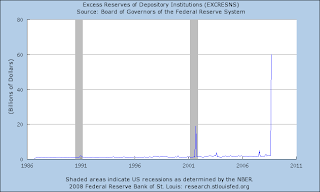 Muthu Muthukrishnan sees a reverse auction algorithmic need in the current crisis. But the question, in my view, should be how we can algorithmically restore trust between the different actors and develop better algorithms for the regulators. For instance, the regulators need to understand some information from many different actors without each actors having the possibility of reconstructing the full picture if they, by accident, have access to their competitors information. From this data, the State or the Feds can give assurances and funnel money to the right entities while restoring some partial trust while not giving too much information to the different actors during this unfolding. In a sense, the study by Yaron Rachlin and Dror Baron on The Secrecy of Compressive Sensing Measurements provides some type of assurance that the actors would have a tough time decoding each others' information. If you think this is just talk, ask Volvo about trust, because they need some [Update: The story about Volvo has changed. Demand for Volvo Trucks seem to have fallen by 50%  in Q3, see comments in this entry ]
But what do I know, I am just a nuclear engineer who has never dealt with WMDs, except for diposing of them. Now that I think about it, even in the disposition process, trust was never a given and we always had to resort to specific technical means of enforcing that trust as should the readers of Marie Claire.... 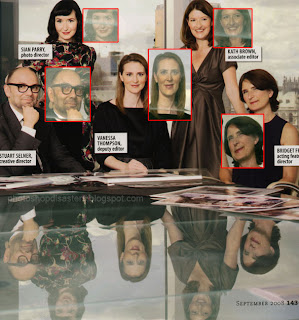 Credit: Graph taken from Greg Mankiw's blog and Marie Claire: On reflection, perhaps not from the Photoshopdisasters blog.
By Igor at 10/26/2008 01:08:00 AM

Email ThisBlogThis!Share to TwitterShare to FacebookShare to Pinterest
labels: nuclear