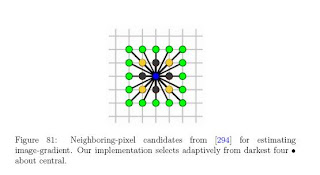 Jon Dattorro forwarded me an excerpt of his book on Convex Optimization [1] where he described another reconstruction algorithm he calls Convex Iteration. The part of interest is located in Chapter 4 page 306 to 314. Jon also mentioned to me:

The most salient results of the paper comprise the Convex Iteration method for minimizing cardinality, and a new lower bound of 2% on image-gradient cardinality for the 256x256 Shepp-Logan phantom from the Matlab Image Processing Toolbox. Previously believed to be 3%, this new lower bound is a consequence of an adaptive strategy for computing image-gradient; specifically, the algorithm assumes that number of pixels (between 1 and 4), involved in an image-gradient estimation, is variable.


The Matlab code that realizes the algorithm (available here) is exceedingly fast by comparison with other contemporary methods. It runs on a laptop in a Matlab minute; its speed due, in large part, to Josh Trzasko at Mayo Clinic.

I very much like Jon's basic explanations in his book. He previously gave an earlier similar clear explanation in "Trace: What is it good for ? - How Compressed Sensing relates to Dimensionality Reduction".

The second algorithm is devised by Zhaosong Lu in Gradient based method for cone programming with application to large-scale compressed sensing. The abstract reads:

In this paper, we study a gradient based method for general cone programming (CP) problems. In particular, we first consider four natural primal-dual convex smooth minimization reformulations for them, and then discuss a variant of Nesterov’s smooth (VNS) method recently proposed by Tseng [30] for solving these reformulations. The associated worst-case major arithmetic operations costs of the VNS method for them are estimated and compared. We show that for a class of CP problems, the VNS method based on the last reformulation generally outperforms that applied to the others. Finally, we discuss the application of the VNS method [30] to some large-scale CP problems arising in compressed sensing, which are highly challenging to simplex and/or interior point (IP) methods. The performance of this method is compared with the IP method [4] that is specially implemented for these problems. Our computational results demonstrate that for these CP problems, the VNS method [30] applied to the mostly suitable reformulation mentioned above substantially outperforms the IP method [4]. 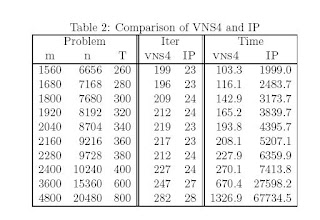 These algorithms as well as those mentioned yesterday are listed in the reconstruction section of the Big Picture.