We have three papers today related to different reconstruction techniques. 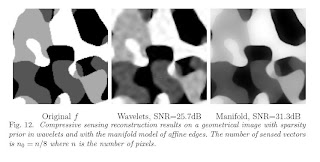 The first one refers back to the manifold signal processing we have seen before being developed by Michael Wakin in his thesis. While there is an issue of non-differentiability in images featuring occluding elements, the smooth manifold approach is somehow ideally fitted with that of textures. The paper by Gabriel Peyre entitled Manifold Models for Signals and Images looks at this problem. The abstract reads:

This article proposes a new class of models for natural signals and images. The set of patches extracted from the data to analyze is constrained to be close to a low dimensional manifold. This manifold structure is detailed for various ensembles suitable for natural signals, images and textures modeling. These manifolds provide a low-dimensional parametrization of the local geometry of these datasets. These manifold models can be used to regularize inverse problems in signal and image processing. The restored signal is represented as a smooth curve or surface traced on the manifold that matches the forward measurements. A manifold pursuit algorithm computes iteratively a solution of the manifold regularization problem. Numerical simulations on inpainting and compressive sensing inversion show that manifolds models bring an improvement for the recovery of data with geometrical features.


I note the development of a manifold based greedy algorithm called manifold pursuit.

We consider the classical Compressed Sensing problem. We have a large under-determined set of noisy measurements Y=GX+N, where X is a sparse signal and G is drawn from a random ensemble. In this paper we focus on a quantized linear programming solution for support recovery. Our solution of the problem amounts to solving $\min \|Z\|_1 ~ s.t. ~ Y=G Z$, and quantizing/thresholding the resulting solution $Z$. We show that this scheme is guaranteed to perfectly reconstruct a discrete signal or control the element-wise reconstruction error for a continuous signal for specific values of sparsity. We show that in the linear regime when the sparsity, $k$, increases linearly with signal dimension, $n$, the sign pattern of $X$ can be recovered with $SNR=O(\log n)$ and $m= O(k)$ measurements. Our proof technique is based on perturbation of the noiseless $\ell_1$ problem. Consequently, the achievable sparsity level in the noisy problem is comparable to that of the noiseless problem. Our result offers a sharp characterization in that neither the $SNR$ nor the sparsity ratio can be significantly improved. In contrast previous results based on LASSO and MAX-Correlation techniques assume significantly larger $SNR$ or sub-linear sparsity. We also show that our final result can be obtained from Dvoretsky theorem rather than the restricted isometry property (RIP). The advantage of this line of reasoning is that Dvoretsky's theorem continues to hold for non-singular transformations while RIP property may not be satisfied for the latter case.

I note the independence of their approach from the Restricted Isometry Property.

Finally, the third paper is about using a maximum entropy method in A New Reconstruction Approach to Compressed Sensing by Tianjing Wang and Zhen Yang. The abstract reads:

Compressed sensing is a new concept in signal processing where one seeks to minimize the number of measurements to be taken from signals while still retaining the information necessary to approximate them well. Nonlinear algorithms, such as norm optimization problem, are used to reconstruct the signal from the measured data. This paper proposes a maximum entropy function method which intimately relates to homotopy method as a computational approach to solve the optimization problem. Maximum entropy function method makes it possible to design random measurements which contain the information necessary to reconstruct signal with accuracy. Both the theoretical evidences and the extensive experiments show that it is an effective technique for signal reconstruction. This approach offers several advantages over other methods, including scalability and robustness.

Finally, DARPA has put out a research request for proposals entitled Mathematical Challenges. Compressive Sensing has some obvious bearing on some of these challenges, to name a few I'd go for 6, 7, 8, 10 and 15.


Mathematical Challenge One: The Mathematics of the Brain

Mathematical Challenge Nine: What are the Physical Consequences of Perelman’s Proof of Thurston’s Geometrization Theorem?

Mathematical Challenge Sixteen: What are the Symmetries and Principles for Biology?

Mathematical Challenge Twenty-three: What are the Fundamental Laws of Biology?