One of the finding, in recent years, us that when faced with underdetermined/undersampled problems, you can choose any regularization you want. The Advanced Matrix Factorization roster of techniques is a prime example of that. Today, we go beyond the traditional Moore-Penrose inverse ! 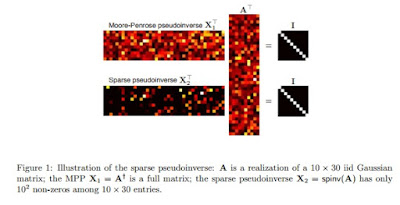 This is the second part of a two-paper series on generalized inverses that minimize matrix norms. In Part II we focus on generalized inverses that are minimizers of entrywise p norms whose main representative is the sparse pseudoinverse for p = 1. We are motivated by the idea to replace the Moore-Penrose pseudoinverse by a sparser generalized inverse which is in some sense well-behaved. Sparsity implies that it is faster to apply the resulting matrix; well-behavedness would imply that we do not lose much in stability with respect to the least-squares performance of the MPP. We first address questions of uniqueness and non-zero count of (putative) sparse pseu-doinverses. We show that a sparse pseudoinverse is generically unique, and that it indeed reaches optimal sparsity for almost all matrices. We then turn to proving our main stability result: finite-size concentration bounds for the Frobenius norm of p-minimal inverses for 1 \le p \le 2. Our proof is based on tools from convex analysis and random matrix theory, in particular the recently developed convex Gaussian min-max theorem. Along the way we prove several results about sparse representations and convex programming that were known folklore, but of which we could find no proof.