I just realized this paper was on my pile when I saw that Waheed mentioned an implementation of it on his twitter feed. 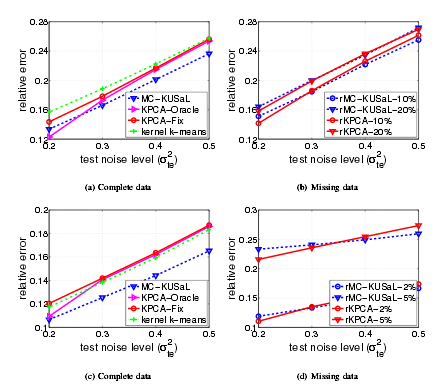 Learning the nonlinear geometry of high-dimensional data: Models and algorithms by Tong Wu, Waheed U. Bajwa

Modern information processing relies on the axiom that high-dimensional data lie near low-dimensional geometric structures. This paper revisits the problem of data-driven learning of these geometric structures and puts forth two new nonlinear geometric models for data describing "related" objects/phenomena. The first one of these models-suited for mildly nonlinear data-is termed the metric-constrained union-of-subspaces (MC-UoS) model, which straddles the two extremes of the subspace model and the union-of-subspaces model. The second one of these models-suited for highly nonlinear data-is termed the metric-constrained kernel union-of-subspaces (MC-KUoS) model, which generalizes the kernel subspace model. The main contributions of this paper in this regard include the following. First, it motivates and formalizes the problems of MC-UoS and MC-KUoS learning. Second, it presents algorithms that efficiently learn an MC-UoS or an MC-KUoS underlying data of interest. Third, it extends these algorithms to the case when parts of the data are missing. Last, but not least, it reports the outcomes of a series of numerical experiments involving both synthetic and real data that demonstrate the superiority of the proposed geometric models and learning algorithms over existing approaches in the literature. These experiments also help clarify the connections between this work and the literature on (subspace and kernel k-means) clustering.

An implementation is available here: https://bitbucket.org/SigProcessing/code_wb-tsp2015
Join the CompressiveSensing subreddit or the Google+ Community and post there !

Liked this entry ? subscribe to Nuit Blanche's feed, there's more where that came from. You can also subscribe to Nuit Blanche by Email, explore the Big Picture in Compressive Sensing or the Matrix Factorization Jungle and join the conversations on compressive sensing, advanced matrix factorization and calibration issues on Linkedin.
By Igor at 12/29/2016 06:17:00 AM