The many ways to solve the Linear Boltzman / Transport Equation

I had read this review a while back but could not put my finger back on it. I just found it again and I am writing this entry more as a reminder than anything. The linear Boltzman equation is used in Nuclear Engineering to figure out the population of neutrons in nuclear reactor cores (The engineering that describes this is called neutronics) The difficulty in solving this equation stems from the high dimensionality of the problem: it spans seven dimensions (x-y-z, two angles, and time) and is far from being solved deterministically without an approximation or two, or four.... since the production of a grid of n points for the full problem yields a O(n^7) problem. Since the late 1940s, many people have taken a stab at it with a very rich set of approaches. The following document is a bibliography on finite element and related methods analysis in reactor physics computations that spans from 1971 to 1997. A simplification of this equation yields the diffusion equation used in diverse approximation in optics, and is equivalent to the light transport equations used in graphics rendering. 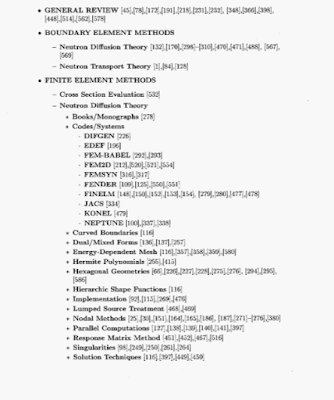 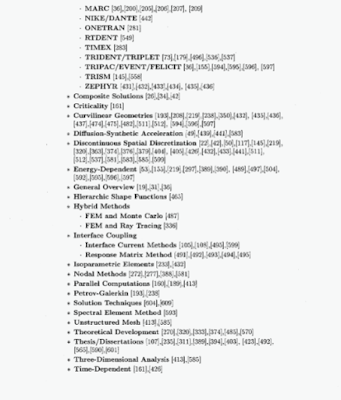 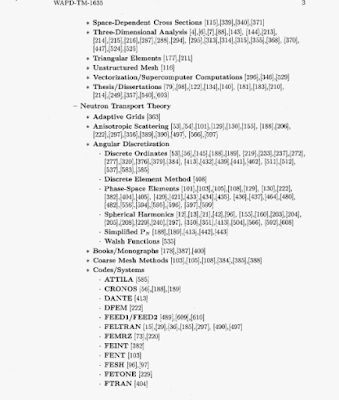 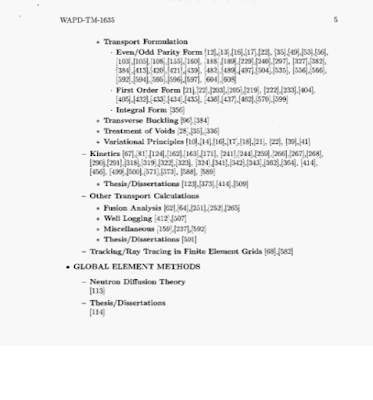 A bibliography on finite element and related methods analysis in reactor physics computations (1971--1997) by David C. Carpenter ( pdf is here)

This bibliography provides a list of references on finite element and related methods analysis in reactor physics computations. These references have been published in scientific journals, conference proceedings, technical reports, thesis/dissertations and as chapters in reference books from 1971 to the present. Both English and non-English references are included. All references contained in the bibliography are sorted alphabetically by the first author`s name and a subsort by date of publication. The majority of the references relate to reactor physics analysis using the finite element method. Related topics include the boundary element method, the boundary integral method, and the global element method. All aspects of reactor physics computations relating to these methods are included: diffusion theory, deterministic radiation and neutron transport theory, kinetics, fusion research, particle tracking in finite element grids, and applications. For user convenience, many of the listed references have been categorized. The list of references is not all inclusive. In general, nodal methods were purposely excluded, although a few references do demonstrate characteristics of finite element methodology using nodal methods (usually as a non-conforming element basis). This area could be expanded. The author is aware of several other references (conferences, thesis/dissertations, etc.) that were not able to be independently tracked using available resources and thus were not included in this listing.