Using radio waves to evaluate people's location is featured in two ways today with WiTrack for inside applications (and the ability to distinguish gestures) and with a different application that goes outside.

This paper introduces WiTrack, a system that tracks the 3D motion of a user from the radio signals reflected off her body. It works even if the person is occluded from the WiTrack device or in a different room. WiTrack does not require the user to carry any wireless device, yet its accuracy exceeds current RF localization systems, which require the user to hold a transceiver. Empirical measurements with a WiTrack prototype show that, on average, it localizes the center of a human body to within a median of 10 to 13 cm in the x and y dmensions, and 21 cm in the z dimension. It also provides coarse tracking of body parts, identifying the direction of a pointing hand with a median of 11.2◦. WiTrack bridges a gap between RF-based localization systems which locate a user through walls and occlusions, and human-computer interaction systems like Kinect, which can track a user without instrumenting her body, but require the user to stay within the direct line of sight of the device.


The project page is here. 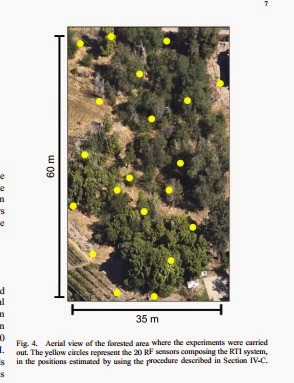 RF sensor networks are used to localize people indoor without requiring them to wear invasive electronic devices. These wireless mesh networks, formed by low-power radio transceivers, continuously measure the received signal strength (RSS) of the links. Radio Tomographic Imaging (RTI) is a technique that generates 2D images of the change in the electromagnetic field inside the area covered by the radio transceivers to spot the presence and movements of animates (e.g., people, large animals) or large metallic objects (e.g., cars). Here, we present a RTI system for localizing and tracking people outdoors. Differently than in indoor environments where the RSS does not change significantly with time unless people are found in the monitored area, the outdoor RSS signal is time-variant, e.g., due to rainfalls or wind-driven foliage. We present a novel outdoor RTI method that, despite the nonstationary noise introduced in the RSS data by the environment, achieves high localization accuracy and dramatically reduces the energy consumption of the sensing units. Experimental results demonstrate that the system accurately detects and tracks a person in real-time in a large forested area under varying environmental conditions, significantly reducing false positives, localization error and energy consumption compared to state-of-the-art RTI methods.