Following up on yesterday's summary of the panel discussion asking the question: Is Deep Learning the Final Frontier and the End of Signal Processing ? here is yesterday's tutorial on Scaling up Deep Learning by Yoshua Bengio

Here are some of the recent preprints by Yoshua Bengio and his team. Let us note that the generative adversarial work, at the very least serves; the purpose of answering a question that was asked repeatedly in the panel discussion on the actual functional space that is well approximated by the networks. 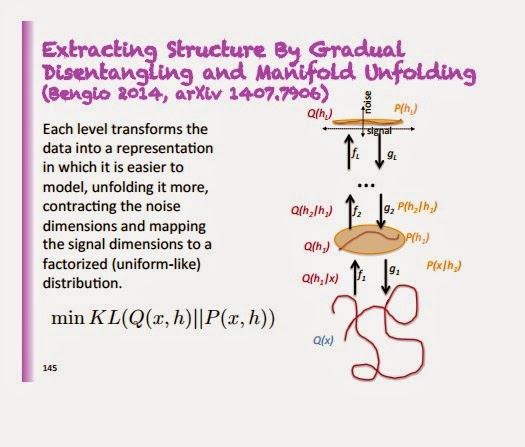 We propose to exploit {\em reconstruction} as a layer-local training signal for deep learning. Reconstructions can be propagated in a form of target propagation playing a role similar to back-propagation but helping to reduce the reliance on derivatives in order to perform credit assignment across many levels of possibly strong non-linearities (which is difficult for back-propagation). A regularized auto-encoder tends produce a reconstruction that is a more likely version of its input, i.e., a small move in the direction of higher likelihood. By generalizing gradients, target propagation may also allow to train deep networks with discrete hidden units. If the auto-encoder takes both a representation of input and target (or of any side information) in input, then its reconstruction of input representation provides a target towards a representation that is more likely, conditioned on all the side information. A deep auto-encoder decoding path generalizes gradient propagation in a learned way that can could thus handle not just infinitesimal changes but larger, discrete changes, hopefully allowing credit assignment through a long chain of non-linear operations. In addition to each layer being a good auto-encoder, the encoder also learns to please the upper layers by transforming the data into a space where it is easier to model by them, flattening manifolds and disentangling factors. The motivations and theoretical justifications for this approach are laid down in this paper, along with conjectures that will have to be verified either mathematically or experimentally, including a hypothesis stating that such auto-encoder mediated target propagation could play in brains the role of credit assignment through many non-linear, noisy and discrete transformations.

Many state-of-the-art results obtained with deep networks are achieved with the largest models that could be trained, and if more computation power was available, we might be able to exploit much larger datasets in order to improve generalization ability. Whereas in learning algorithms such as decision trees the ratio of capacity (e.g., the number of parameters) to computation is very favorable (up to exponentially more parameters than computation), the ratio is essentially 1 for deep neural networks. Conditional computation has been proposed as a way to increase the capacity of a deep neural network without increasing the amount of computation required, by activating some parameters and computation "on-demand", on a per-example basis. In this note, we propose a novel parametrization of weight matrices in neural networks which has the potential to increase up to exponentially the ratio of the number of parameters to computation. The proposed approach is based on turning on some parameters (weight matrices) when specific bit patterns of hidden unit activations are obtained. In order to better control for the overfitting that might result, we propose a parametrization that is tree-structured, where each node of the tree corresponds to a prefix of a sequence of sign bits, or gating units, associated with hidden units.

In this paper, we propose a novel neural network model called RNN Encoder--Decoder that consists of two recurrent neural networks (RNN). One RNN encodes a sequence of symbols into a fixed-length vector representation, and the other decodes the representation into another sequence of symbols. The encoder and decoder of the proposed model are jointly trained to maximize the conditional probability of a target sequence given a source sequence. The performance of a statistical machine translation system is empirically found to improve by using the conditional probabilities of phrase pairs computed by the RNN Encoder--Decoder as an additional feature in the existing linear model. Qualitatively, we show that the proposed model learns a semantically and syntactically meaningful representation of linguistic phrases.

We study the complexity of functions computable by deep feedforward neural networks with piecewise linear activations in terms of the symmetries and the number of linear regions that they have. Deep networks are able to sequentially map portions of each layer's input-space to the same output. In this way, deep models compute functions that react equally to complicated patterns of different inputs. The compositional structure of these functions enables them to re-use pieces of computation exponentially often in terms of the network's depth. This paper investigates the complexity of such compositional maps and contributes new theoretical results regarding the advantage of depth for neural networks with piecewise linear activation functions. In particular, our analysis is not specific to a single family of models, and as an example, we employ it for rectifier and maxout networks. We improve complexity bounds from pre-existing work and investigate the behavior of units in higher layers.

We propose a new framework for estimating generative models via an adversarial process, in which we simultaneously train two models: a generative model G that captures the data distribution, and a discriminative model D that estimates the probability that a sample came from the training data rather than G. The training procedure for G is to maximize the probability of D making a mistake. This framework corresponds to a minimax two-player game. In the space of arbitrary functions G and D, a unique solution exists, with G recovering the training data distribution and D equal to 1/2 everywhere. In the case where G and D are defined by multilayer perceptrons, the entire system can be trained with backpropagation. There is no need for any Markov chains or unrolled approximate inference networks during either training or generation of samples. Experiments demonstrate the potential of the framework through qualitative and quantitative evaluation of the generated samples.

Training deep directed graphical models with many hidden variables and performing inference remains a major challenge. Helmholtz machines and deep belief networks are such models, and the wake-sleep algorithm has been proposed to train them. The wake-sleep algorithm relies on training not just the directed generative model but also a conditional generative model (the inference network) that runs backward from visible to latent, estimating the posterior distribution of latent given visible. We propose a novel interpretation of the wake-sleep algorithm which suggests that better estimators of the gradient can be obtained by sampling latent variables multiple times from the inference network. This view is based on importance sampling as an estimator of the likelihood, with the approximate inference network as a proposal distribution. This interpretation is confirmed experimentally, showing that better likelihood can be achieved with this reweighted wake-sleep procedure, which also provides a natural way to estimate the likelihood itself. Based on this interpretation, we propose that a sigmoid belief network is not sufficiently powerful for the layers of the inference network, in order to recover a good estimator of the posterior distribution of latent variables. Our experiments show that using a more powerful layer model, such as NADE, yields substantially better generative models.

We study the complexity of functions computable by deep feedforward neural networks with piecewise linear activations in terms of the symmetries and the number of linear regions that they have. Deep networks are able to sequentially map portions of each layer's input-space to the same output. In this way, deep models compute functions that react equally to complicated patterns of different inputs. The compositional structure of these functions enables them to re-use pieces of computation exponentially often in terms of the network's depth. This paper investigates the complexity of such compositional maps and contributes new theoretical results regarding the advantage of depth for neural networks with piecewise linear activation functions. In particular, our analysis is not specific to a single family of models, and as an example, we employ it for rectifier and maxout networks. We improve complexity bounds from pre-existing work and investigate the behavior of units in higher layers.