Performing some adpative sampling based on the fact that some initial MRI was taken earlier, this is what the first paper proposes. The second paper however is non adaptive but encodes noiselets in order to maximize incoherence. 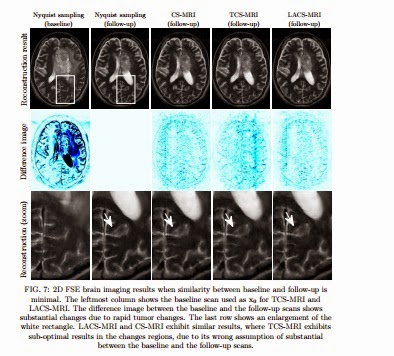 Purpose: The mutual similarity of the follow-up scans in longitudinal studies is exploited on top of the well known sparse transform domains for rapid MRI by reducing the number of k-space measurements.
Theory and Methods: A framework for adaptive Compressed Sensing (CS) MRI that exploits the redundancy of the acquired data in longitudinal studies is proposed. The baseline MR scan is utilized both in the sampling stage, with adaptive CS, and in the reconstruction stage, with weighted CS. In adaptive CS, k-space sampling locations are optimized such that the acquired data is focused on the change between the follow-up MRI and the former one. Weighted CS uses the locations of the nonzero coefficients in the sparse domains as a prior in the recovery process.
Results: Experiments demonstrate that our longitudinal adaptive CS MRI (LACS-MRI) scheme provides reconstruction quality which outperforms traditional CS MRI for rapid MRI. Examples are shown on patients with brain tumors and demonstrate improved spatial resolution and accelerated acquisition for 2D and 3D brain imaging.
Conclusions: Our method provides high quality MRI reconstruction, at 10-fold k-space undersampling. The proposed approach can play a major part and significantly reduce scanning time in many applications that consist of disease follow-up and monitoring of changes. 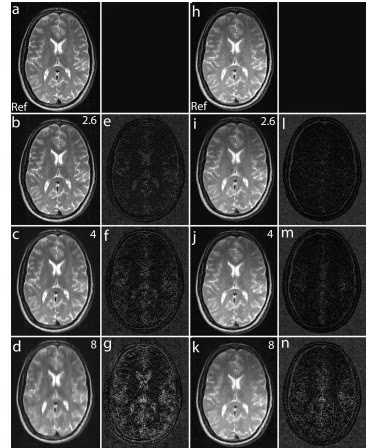 The incoherence between measurement and sparsifying transform matrices and the restricted isometry property (RIP) of measurement matrix are two of the key factors in determining the performance of compressive sensing (CS). In CS-MRI, the randomly under-sampled Fourier matrix is used as the measurement matrix and the wavelet transform is usually used as sparsifying transform matrix. However, the incoherence between the randomly under-sampled Fourier matrix and the wavelet matrix is not optimal, which can deteriorate the performance of CS-MRI. Using the mathematical result that noiselets are maximally incoherent with wavelets, this paper introduces the noiselet unitary bases as the measurement matrix to improve the incoherence and RIP in CS-MRI, and presents a method to design the pulse sequence for the noiselet encoding. This novel encoding scheme is combined with the multichannel compressive sensing (MCS) framework to take the advantage of multichannel data acquisition used in MRI scanners. An empirical RIP analysis is presented to compare the multichannel noiselet and multichannel Fourier measurement matrices in MCS. Simulations are presented in the MCS framework to compare the performance of noiselet encoding reconstructions and Fourier encoding reconstructions at different acceleration factors. The comparisons indicate that multichannel noiselet measurement matrix has better RIP than that of its Fourier counterpart, and that noiselet encoded MCS-MRI outperforms Fourier encoded MCS-MRI in preserving image resolution and can achieve higher acceleration factors. To demonstrate the feasibility of the proposed noiselet encoding scheme, two pulse sequences with tailored spatially selective RF excitation pulses was designed and implemented on a 3T scanner to acquire the data in the noiselet domain from a phantom and a human brain.