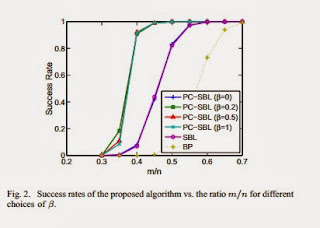 I sure would like to see the complete sharp phase transition of this solver: Pattern-Coupled Sparse Bayesian Learning for Recovery of Block-Sparse Signals by Jun Fang, Yanning Shen, Hongbin Li, Pu Wang

We consider the problem of recovering block-sparse signals whose structures are unknown \emph{a priori}. Block-sparse signals with nonzero coefficients occurring in clusters arise naturally in many practical scenarios. However, the knowledge of the block structure is usually unavailable in practice. In this paper, we develop a new sparse Bayesian learning method for recovery of block-sparse signals with unknown cluster patterns. Specifically, a pattern-coupled hierarchical Gaussian prior model is introduced to characterize the statistical dependencies among coefficients, in which a set of hyperparameters are employed to control the sparsity of signal coefficients. Unlike the conventional sparse Bayesian learning framework in which each individual hyperparameter is associated independently with each coefficient, in this paper, the prior for each coefficient not only involves its own hyperparameter, but also the hyperparameters of its immediate neighbors. In doing this way, the sparsity patterns of neighboring coefficients are related to each other and the hierarchical model has the potential to encourage structured-sparse solutions. The hyperparameters, along with the sparse signal, are learned by maximizing their posterior probability via an expectation-maximization (EM) algorithm. Numerical results show that the proposed algorithm presents uniform superiority over other existing methods in a series of experiments.

Liked this entry ? subscribe to Nuit Blanche's feed, there's more where that came from. You can also subscribe to Nuit Blanche by Email, explore the Big Picture in Compressive Sensing or the Matrix Factorization Jungle and join the conversations on compressive sensing, advanced matrix factorization and calibration issues on Linkedin.
By Igor at 12/04/2013 10:17:00 AM

I'm underwhelmed by the Lena picture, given just the standard L_1 reconstruction.