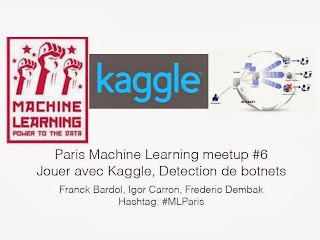 So last night, we had our Paris Machine Learning meetup (#6). Our group has more than 425 members which probably makes it one the largest machine learning meetup in Europe (second behind London). Our LinkedIn group has 199 members and already several job offers there (please post them there with the indication [job] in the title ). Next meeting is January 15th.

The people counter on Meetup indicated 111 people. I counted 65 physically in the room. The counter went up to a whopping 137 people two days before the meetup. We were in some  'attention competition' with two other interesting meetups (node.js and Leweb13). At least, we did not get train strikes like today. Again, Franck and I are enormously grateful to the folks who changed their RSVPs.


DojoEvents hosted us once again. Their value proposition is listed here. If you are a startup and want physical hosting in Paris, check them out. They also have an event based outfit if you want to organize meetups, hackatons and so forth. Guillaume Pellerin used his Telecasting solution from Parisson to do the streaming and the recording of the meeting.

Besides the informal get together, the meetup featured two speakers:

Matthieu provided a good overview of what he and his team at Dataiku are doing in the Yandex Kaggle challenge. He also provided the code for parsing that competition's dataset. It is available at:

The Dataiku team (currently ranked 11th on the Yandex Challenge) is also interested in people joining them to improve their scores. During the presentation, Matthieu mentioned the long training time but I felt it probably was an instance of low rank matrix completion if one sets it up the right way [4]. All in all, a very nice introduction in the subject and a strong technical Q&A like we like them.
On a different note, Dataiku is also hiring.

Joseph showed us the design of the ELM approach to neural networks he used on a botnet at OrangeLabs with Stephane. More on that later. Suffice to say, those ELM networks are very similar to the Random Kitchen Sinks/FastFood implementation as well as other works (see also the Summer of Deeper Kernels) that I will probably feature in this upcoming Sunday Morning Insight. I initially was expecting a run-of-the-mill neural network presentation, instead I got blown away: 14 seconds of training, wow. You know what ? maybe RKS/ELM should be tried on the Yandex set...I am just saying.

In order to provide some context, Franck and I inserted a What's New presentation, I think it was well received. In particular, we mentioned the NIPS announcements as well as the PSIM program as Machine Learning is always a crosscutting technology and that it really has the potential to provide a very large ROI:
LeCun's announcement at Facebook and Geoff Hinton's move with Google sends a pretty clear signal  that neural networks are OK and that the time has come for 'AI for images' i.e. image understanding. In my mind, since the both of them are in the neural network vein, it is also time we get to figure out how those neural network hit the phase transition and how this provides us with rules of thumbs for designing them see[1,2]. Gabriel, one the meetuper who was at NIPS, wrote a small summary of what happened at the announcement.

Thank you to both of our speakers Matthieu Scordia and Joseph Ghafari who were good sports in answering our, sometimes, long winded questions.


In the champagne drinking part of the meeting, we discussed education analytics (we need to talk about SPARFA and similar solvers), how to get Danny Bickson to give a talk in Paris on GraphLab (if you are somewhere else in Europe and you -or better your company- have an interest in him coming across the pond, please email and let's talk), but also how the french program PSIM could potentially be a fit to businesses that are just on the right side of impossible [3] (That would include applications of this).

Live Streaming was provided during the presentations and a recording should be online shortly.

The rest of the archives are here.
The Paris Machine Learning LinkedIn group has now more than 202 members and four job offers.

Liked this entry ? subscribe to Nuit Blanche's feed, there's more where that came from. You can also subscribe to Nuit Blanche by Email, explore the Big Picture in Compressive Sensing or the Matrix Factorization Jungle and join the conversations on compressive sensing, advanced matrix factorization and calibration issues on Linkedin.
By Igor at 12/12/2013 10:27:00 AM