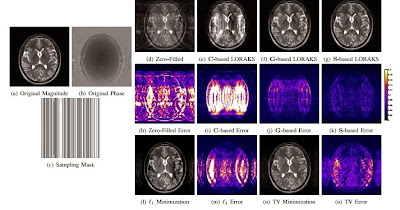 Justin just sent me the following:

Hi Igor,
I just had an article accepted to IEEE Transactions on Medical Imaging that I thought might be of interest to you, based on your interest in my previous work. As described in the article, we were able to successfully map some of the oldest and most classical forms of MRI image constraints into a very modern low-rank matrix reconstruction framework, making improvements to both the old and the new along the way. You can find a preprint here: http://mr.usc.edu/documents/preprint_LORAKS.pdf, and software implementations are forthcoming.
Cheers

Thanks Justin. Here is the paper: Low-Rank Modeling of Local k-Space Neighborhoods (LORAKS) for Constrained MRI by Justin P. Haldar

Recent theoretical results on low-rank matrix reconstruction have inspired significant interest in low-rank modeling of MRI images. Existing approaches have focused on higher-dimensional scenarios with data available from multiple channels, timepoints, or image contrasts. The present work demonstrates that single-channel, single-contrast, singletimepoint k-space data can also be mapped to low-rank matrices when the image has limited spatial support or slowly varying phase. Based on this, we develop a novel and flexible framework for constrained image reconstruction that uses low-rank matrix modeling of local k-space neighborhoods (LORAKS). A new regularization penalty and corresponding algorithm for promoting low-rank are also introduced. The potential of LORAKS is demonstrated with simulated and experimental data for a range of denoising and sparse-sampling applications. LORAKS is also compared against state-of-the-art methods like homodyne reconstruction, `1-norm minimization, and total variation minimization, and is demonstrated to have distinct features and advantages. In addition, while calibration-based support and phase constraints are commonly used in existing methods, the LORAKS framework enables calibrationless use of these constraints.

I note that the technique could be used for devising the eigenfunctions of the Linear Boltzman Equation. The whole field of Caseology is based on the fact that given a function g(x), the following equation (much like the one that yields equation 3 in the paper) is

with PV the Principal Value or finite part and \delta the dirac distribution. The second term can be further simplified (see eq 1, page 52 of [2]). Let us note here that the C value is left to be determined as in the case of undertermined linear systems of equations, i.e; elements of the nullspace of H (in CS, those degrees of freedom are further constrained by the sparsity requirement).

Liked this entry ? subscribe to Nuit Blanche's feed, there's more where that came from. You can also subscribe to Nuit Blanche by Email, explore the Big Picture in Compressive Sensing or the Matrix Factorization Jungle and join the conversations on compressive sensing, advanced matrix factorization and calibration issues on Linkedin.
By Igor at 12/13/2013 12:00:00 AM