Dear Igor,
Thank you for maintaining the very informative and resourceful Nuit Blanche blog. I would like to bring your attention on one of our recent works on Blind compressive sensing dynamic MRI, and if possible share it on your blog.
Sajan Goud Lingala, Mathews Jacob, "Blind compressive sensing dynamic MRI", IEEE Transactions on Medical Imaging, (2013 in press).
The early view of the paper can be found at www.engineering.uiowa.edu/~jcb/Papers/bcs.pdf
....
Thank you,
Sajan Goud Lingala,
Phd graduate student,
Biomedical Engineering,
The University of Iowa 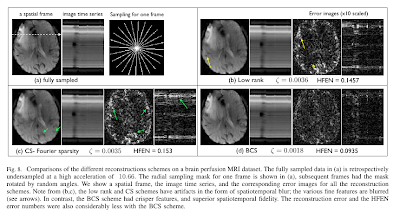 Sajan tells me that they intend on releasing an implementation of their work a little later. In the meantime, here is the paper: Blind compressive sensing dynamic MRI by Sajan Goud Lingala, Mathews Jacob. The abstract reads:

We propose a novel blind compressive sensing (BCS) frame work to recover dynamic magnetic resonance images from undersampled measurements. This scheme models the dynamic signal as a sparse linear combination of temporal basis functions, chosen from a large dictionary. In contrast to classical compressed sensing, the BCS scheme simultaneously estimates the dictionary and the sparse coefficients from the undersampled measurements. Apart from the sparsity of the coefficients, the key difference of the BCS scheme with current low rank methods is the non-orthogonal nature of the dictionary basis functions. Since the number of degrees of freedom of the BCS model is smaller than that of the low-rank methods, it provides improved reconstructions at high acceleration rates. We formulate the reconstruction as a constrained optimization problem; the objective function is the linear combination of a data consistency term and sparsity promoting l1 prior of the coefficients. The Frobenius norm dictionary constraint is used to avoid scale ambiguity. We introduce a simple and efficient majorize-minimize algorithm, which decouples the original criterion into three simpler sub problems. An alternating minimization strategy is used, where we cycle through the minimization of three simpler problems. This algorithm is seen to be considerably faster than approaches that alternates between sparse coding and dictionary estimation, as well as the extension of K-SVD dictionary learning scheme. The use of the l1 penalty and Frobenius norm dictionary constraint enables the attenuation of insignificant basis functions compared to the l0 norm and column norm constraint assumed in most dictionary learning algorithms; this is especially important since the number of basis functions that can be reliably estimated is restricted by the available measurements. We also observe that the proposed scheme is more robust to local minima compared to K-SVD method, which relies on greedy sparse coding. Our phase transition experiments demonstrate that the BCS scheme provides much better recovery rates than classical Fourier-based CS schemes, while being only marginally worse than the dictionary aware setting. Since the overhead in additionally estimating the dictionary is low, this method can be very useful in dynamic MRI applications, where the signal is not sparse in known dictionaries. We demonstrate the utility of the BCS scheme in accelerating contrast enhanced dynamic data. We observe superior reconstruction performance with the BCS scheme in comparison to existing low rank and compressed sensing schemes.

In the meantime, here is a different and "older" code from the same authors: k-t SLR an algorithm that performs Accelerated dynamic MRI using low rank and sparse penalties