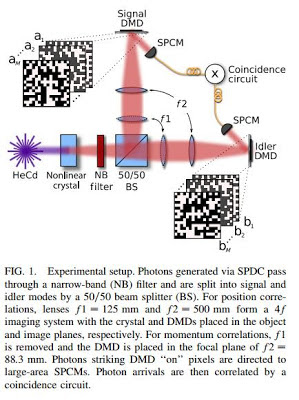 Here is a new preprint using compressive sensing to reduce the scanning time for entanglement imaging. It is a just a question of time before they reduce their scanning even further through the use of the seeded matrices that have been recently fitted to the group testing framework (isn't it funny how that entry makes the connection with ghost computational imaging given today's paper?) or by using any of the AMP solvers like TurboGAMP / GAMP or even SBSL. They went from 310 days down to 8 hours, what's next 1 minutes ? so quantum mechanics type of imaging might actually be useful, that's a whopper :-) Recall many Nobel Prizes were for imaging, let's hope for something absolutely fantastic to come out of this. Here is the paper:

Efficient High-Dimensional Entanglement Imaging with a Compressive-Sensing Double-Pixel Camera by Gregory A. Howland and John C. Howel. The abstract reads:

We implement a double-pixel compressive-sensing camera to efficiently characterize, at high resolution, the spatially entangled fields that are produced by spontaneous parametric down-conversion. This technique leverages sparsity in spatial correlations between entangled photons to improve acquisition times over raster scanning by a scaling factor up to n2/log(n) for n-dimensional images. We image at resolutions up to 1024 dimensions per detector and demonstrate a channel capacity of 8.4 bits per photon. By comparing the entangled photons’ classical mutual information in conjugate bases, we violate an entropic Einstein-Podolsky-Rosen separability criterion for all measured resolutions. More broadly, our result indicates that compressive sensing can be especially effective for higher-order measurements on correlated systems.

Popular Summary: Suppose that Alice and Bob share some 1000-sided dice having special properties: When Alice rolls her “fair” die, it is equally likely to land on any of the 1000 sides. However, when Bob rolls his equally “fair” die, he always rolls the same side as Alice, even if they are far apart and roll at the same time. Even though Alice and Bob’s individual outcomes are random, when considered together, they are correlated and always agree. This rather odd behavior is the essence of quantum entanglement and can be replicated by photons when trying to measure their direction of propagation.
Quantum mechanics tells us that a photon is equally likely to be traveling in many different directions, but, upon actually measuring this direction (rolling the dice), only one direction is found. Strangely, measurements of a second photon entangled with the first, also equally likely to propagate in many directions, will always give the same outcome as the first photon. Unfortunately, this behavior is difficult to observe with state-of-the-art detectors. In our paper, we report that, by combining a technique called compressive sensing with standard imaging arrays, we are able to efficiently observe these complex quantum correlations of pairs of photons produced in a nonlinear optical device.
Characterizing high-dimensional entanglement is challenging because the amount of data required grows exponentially with the number of dimensions. Interesting signals within this parameter space also tend to be sparse, so measuring one is like hunting for needles in a haystack with an unknown number of needles. Furthermore, most entanglement measures require a tomographic procedure to recover a wave function or density matrix with complex coefficients that cannot be directly measured. This procedure requires a complicated series of measurements and postprocessing.
To overcome these limitations, we apply ideas from two fields, information theory and compressive sensing. Information theory provides a way for us to characterize an entangled system directly from measurements by means of a quantity called the classical mutual information. A comparison of classical mutual information in the position and momentum bases allows us to show that the correlations are nonclassical. To handle the high dimensionality, we adapt compressive-sensing single-pixel cameras to change sparsity from a problem into a resource. Compressive sensing is a measurement technique that effectively compresses a signal during measurement, greatly reducing the requisite amount of data. In our system, measurement time is reduced from a year to a few hours.