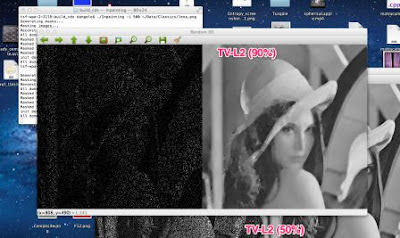 In light of the recent entry showing the results of an inpainting algorithm within an Analysis Operator Learning approach, Emmanuel d'Angelo let me know that he made available his  TV-L2 denoising and inpainting code on Github. The photo above represents another 90% missing pixel reconstruction of Lena. The two approaches are very different in that the analysis operator approach is first learned in the first paper whereas in the case of Emmanuel's code, the analysis operator is given ( Finite Difference/TV). The first approach may yield better results in the inpainting stage but requires a learning phase.

Emmanuel is still writing up his thesis so he is pretty busy for the moment, hence only the inpainting component of the more general algorithm is available. The general algorithm will include a fast version that can deal with the speed of video streams. According to him

" The TV-L2 denoising is exactly what is described in the Chambolle-Pock [1], Alg. 1 of the primal-dual paper (no acceleration). The inpainting procedure is not described as is in the paper, but can be considered as a straightforward deduction from this same paper"

On his blog he describes the algorithm in more detail, it is in French however, so let me translate the remarks:

The code is C++ only, and targeted to work with OpenCV 2.4 and later. My optical flow code will be both OpenCV/C++ and GPGPU/OpenCL (it will be a bug free version of the one I presented at ICIP). I also want to add multithreading with Grand Central Dispatch (aka libdispatch), which is an Apple equivalent of Intel TBB. GCD is open sourced and available for Mac OS, iOS, and FreeBSD.

If I have the time to implement a "good" wavelet transform, I will submit it top the main OpenCV module.

Let us stay tuned for the optical flow algorithm on the Github repository that will run at 30 fps. In the meantime, Emmanuel's publications are listed here.

"The first approach may yield better results in the inpainting stage but requires a learning phase."
This sentence suggests that an operator has to be learned for every individual inpainting task. However, the operator is learned offline and universal, a replacement for the TV, so to speak.
It would be interesting to see how a combination of both approaches would perform.

Good point. I did not mean to imply that if it came across as so, then I ll make a mentiin in the entry.

I agree, once the learning stage is over we have very comparable methods for inpainting.