Ground Based Indirect Imaging of Venus Atmosphere during the upcoming Venus Transit ? 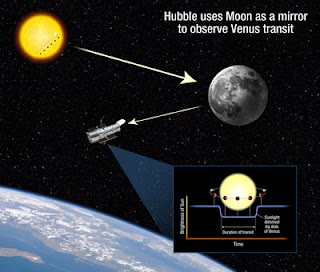 Alejandro pointed out the use of the Moon as a reflector for the upcoming Venus Transit. Some details are given in this press release by the Hubble folks: Hubble to Use Moon as Mirror to See Venus Transit. If you recall, it is similar to some of the concept mentioned earlier on this blog (Imaging With Nature: Planet Sized Sensors (July 24th, 2010)) and featured in These Technologies Do Not Exist, except that in this case, it looks like the Hubble will mostly be used as a detection device as opposed to the more interesting Venus atmosphere reconstruction device. For proof, here is the actual proposal submitted to the Hubble folks by Alfred Vidal-Madjar


In a relatively near future, numerous transiting extrasolar planets will be discovered {gaseous giant planets, Earth-size planets and temperate Uranus in the form of "Ocean-planets"}. Space telescopes operating in the UV-optical-IR will allow the study of their atmospheres. We have to show if and how these observations will give access to the detection of atmospheric species, particularly when telluric planets will be observed, to demonstrate that life may be possible on one of them. For that purpose, we propose to use the unique event of the century, the Venus transit in 2012 {next Venus transits are in 2117 and 2125!}, to demonstrate the feasibility of these observations and show precisely what a Venus-like planet will look-like. To observe the Venus transit with similar conditions as extrasolar planets {no spatial resolution}, we propose to observe the solar light reflected on the Moon during the Venus transit on June 5-6 2012, lasting about 7h 40mn, i.e. about 4 HST orbits. A total of 5 HST orbits will allow us to obtain high S/N transit spectra and reference spectra to reveal the detectable atmospheric species with current space instrumentations. Similarly, in a companion proposal, we propose to observe the Earth transit on the Moon through the reflected light during a total Moon eclipse to directly compare the observed atmospheric signatures of Earth-like and Venus-like extrasolar planets.;


My emphasis on the "no spatial resolution" part of the proposal. Detection is obviously easier than reconstruction. Let us also recall that the goal of this Hubble experiment is to benchmark exo-planet atmosphere detection. We will probably never have enough photons to perform atmosphere reconstruction for planets light years away from here. But in this Venus transit, we have more than enough photons. Hence, we are in the peculiar position of a nice experiment performed to support a concept (exo-planet atmosphere detection) but we are also in a position where could get much more from ground observation that is not directly relevant to exo-planet detection.

Another interesting proposal could feature an atmosphere reconstruction (i.e. some spatial resolution) using the Moon as in the wonderful work of Samuel Hasinoff, Anat Levin, Philip Goode, William  Freeman as featured in Diffuse Reﬂectance Imaging with Astronomical Applications  (mentioned here earlier in  Strike Number 5 in the "Technologies That Do Not Exist" Section ). There, instead of performing a direct imaging method that could be available only to those in the region where transit is directly visible (i.e. telescopes directly pointing to the Sun), one could perform indirect imaging of Venus atmosphere by imaging the Moon while the transit is taking place. In other words, ground telescopes could be used to perform both a direct and an indirect imaging experiment depending on where they are on the globe during the transit. The direct imaging experiment is most probably high on the list of scheduled activities of telescopes in the visible region but I wonder how many telescopes in the non-visible region are dedicated to the indirect imaging task. I bet not many.


I asked Mike Loucks, master trajectory engineer extraordinaiire, where the Moon would be when the transit takes place in June. Mike kindly computed the trajectory of the Moon and it looks it will be at  a 160 degree off the Earth-Sun line angle. 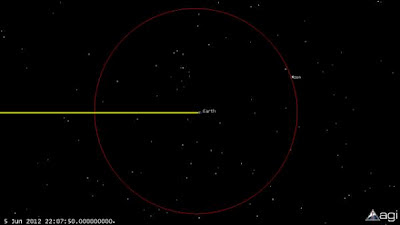 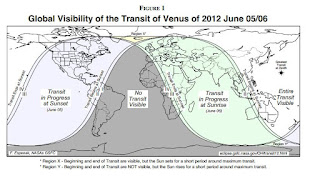 Looks like there are plenty of regions in the world with ground telescope which will be in the indirect imaging region of the world. With regards to making it happen, I would not know where to start, maybe you reader know....

Thanks Mike and Alejandro.