In a previous installment, we decomposed a video featuring a webcam bombarded with a proton beam with the Robust PCA (using GoDec or any of the recent Advanced Matrix Factorization solvers). We noted in that installement that the de-convolution of that image sequence provided:
In a scene without the radiation beam, one expects a simple decomposition to take place for a still scene:

Because of the additive nature of the proton beam on the image frames, when the proton beam is opened on the webcam, one would expect:
Let us note that there is really nothing in the algorithm that constrains the distribution of elements in the sparse component to be positive. Cable and I decided to look into this a little further.and found out that the flickering clock at the bottom of the video sequence induced a non positive sparse component. By removing that clock from the frames, the sparse component became a lot closer to our expectation, i.e. a series of positive elements. Since the CMOS responds as a function as the incident photon energy, the webcam acts as a  multichannel analyzer or a X-ray spectrometer. The figure provided below features the histograms of the elements in the sparse component of the decomposition. Different histograms represent different values of k (see GoDec ). This k parameter allows one to proactively constrain this distribution to be positive. This result is simply terrific, the algorithm provides a physically obvious solution (a distribution of positive elements in the sparse decomposition) even though it is clearly not constrained into doing so. 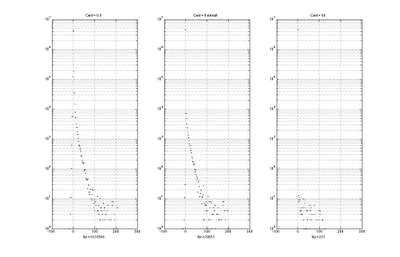 Instead of playing with a parameter (k) that has no obvious physical meaning, it might be a good avenue of research to develop Robust PCA solvers for which there is an explicit constraint on the sparse component. In particular, when it comes to video processing, a robust PCA might benefit from a positive or negative only constraint on the sparse component..