As examplified by this work, genomics is bound to have a profound effect on designing new algorithms. 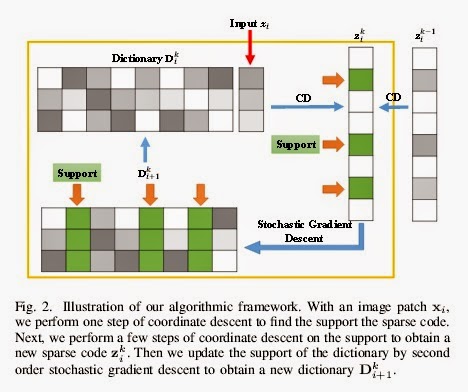 \textit{Drosophila melanogaster} has been established as a model organism for investigating the fundamental principles of developmental gene interactions. The gene expression patterns of \textit{Drosophila melanogaster} can be documented as digital images, which are annotated with anatomical ontology terms to facilitate pattern discovery and comparison. The automated annotation of gene expression pattern images has received increasing attention due to the recent expansion of the image database. The effectiveness of gene expression pattern annotation relies on the quality of feature representation. Previous studies have demonstrated that sparse coding is effective for extracting features from gene expression images. However, solving sparse coding remains a computationally challenging problem, especially when dealing with large-scale data sets and learning large size dictionaries. In this paper, we propose a novel algorithm to solve the sparse coding problem, called Stochastic Coordinate Coding (SCC). The proposed algorithm alternatively updates the sparse codes via just a few steps of coordinate descent and updates the dictionary via second order stochastic gradient descent. The computational cost is further reduced by focusing on the non-zero components of the sparse codes and the corresponding columns of the dictionary only in the updating procedure. Thus, the proposed algorithm significantly improves the efficiency and the scalability, making sparse coding applicable for large-scale data sets and large dictionary sizes. Our experiments on Drosophila gene expression data sets show that the proposed algorithm achieves one or two orders of magnitude speedup compared to the state-of-art sparse coding algorithm.


The attendant implementation of SCC is on Jieping Ye's software page.
Join the CompressiveSensing subreddit or the Google+ Community and post there !