Yet another clear use of sharp phase transitions as an acid test for the purpose of delineating what algorithm does well and which one does ... less well. Outstanding ! Let us hope the implementation comes about at some point in time in the future: 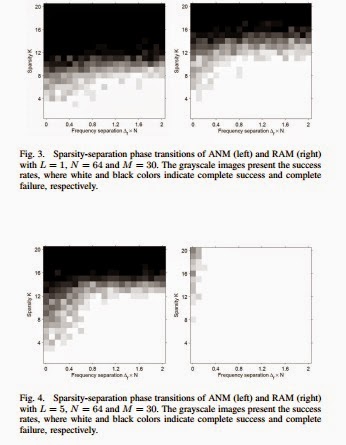 The mathematical theory of super-resolution developed recently by Cand\`{e}s and Fernandes-Granda states that a continuous, sparse frequency spectrum can be recovered with infinite precision via a (convex) atomic norm technique given a set of regularly spaced time-space samples. This theory was then extended to the cases with partial/compressive samples and/or multiple measurement vectors via atomic norm minimization (ANM), known as off-grid/continuous compressed sensing. However, a major problem of existing atomic norm methods is that the frequencies can be recovered only if they are sufficiently separated, prohibiting commonly known high resolution. In this paper, a novel nonconvex optimization method is proposed which guarantees exact recovery under no resolution limit and hence achieves high resolution. A locally convergent iterative algorithm is implemented to solve the nonconvex problem. The algorithm iteratively carries out ANM with a sound reweighting strategy which enhances sparsity and resolution, and is termed as reweighted atomic-norm minimization (RAM). Extensive numerical simulations are carried out to demonstrate the performance of the proposed method with application to direction of arrival (DOA) estimation.