Necdet mentions Nuit Blanche on his personal page. By looking at my recent traffic, I went back to his page and noticed new implementations on his software page. Here is one: 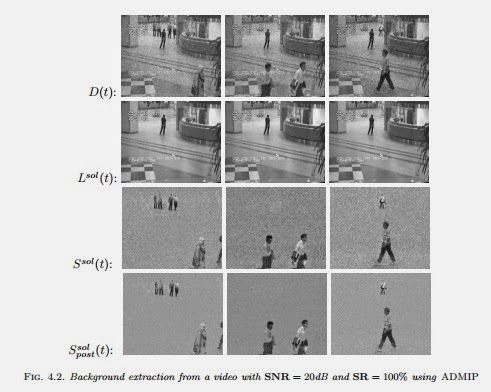 
The stable principal component pursuit (SPCP) is a non-smooth convex optimization problem, the solution of which enables one to reliably recover the low rank and sparse components of a data matrix which is corrupted by a dense noise matrix, even when only a fraction of data entries are observable. In this paper, we propose a new algorithm for solving SPCP. The proposed algorithm is a modification of the alternating direction method of multipliers (ADMM) where we use an increasing sequence of penalty parameters instead of a fixed penalty. The algorithm is based on partial variable splitting and works directly with the non smooth objective function. We show that both primal and dual iterate sequences converge under mild conditions on the sequence of penalty parameters. To the best of our knowledge, this is the first convergence result for a variable penalty ADMM when penalties are not bounded, the objective function is non-smooth and its sub-differential is not uniformly bounded. Using partial variable splitting and adopting an increasing sequence of penalty multipliers, together, significantly reduce the number of iterations required to achieve feasibility in practice. Our preliminary computational tests show that the proposed algorithm works very well in practice, and outperforms ASALM, a state of the art ADMM algorithm for the SPCP problem with a constant penalty parameter.

An implementation of ADMIP is here.