A Neuron as a Signal Processing Device

I had mentioned to Mitya Chklovskii that I was interested in a paper he presented at the last NIPS IEEE Conference on Signals, Systems and Computers, Asilomar 2013 conference a while ago. He just mentioned to me that the paper is now on ArXiv. Woohoo ! In the paper there seems to be experimental evidence that an algorithm finding a sparse rank-1 approximation to the input data matrixis is supported by some physiological evidence. This is all the more interesting in that the algorithm seems connected to subspace tracking. 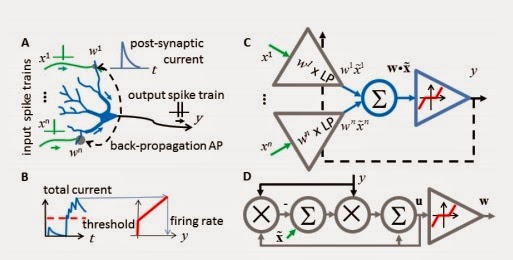 A neuron is a basic physiological and computational unit of the brain. While much is known about the physiological properties of a neuron, its computational role is poorly understood. Here we propose to view a neuron as a signal processing device that represents the incoming streaming data matrix as a sparse vector of synaptic weights scaled by an outgoing sparse activity vector. Formally, a neuron minimizes a cost function comprising a cumulative squared representation error and regularization terms. We derive an online algorithm that minimizes such cost function by alternating between the minimization with respect to activity and with respect to synaptic weights. The steps of this algorithm reproduce well-known physiological properties of a neuron, such as weighted summation and leaky integration of synaptic inputs, as well as an Oja-like, but parameter-free, synaptic learning rule. Our theoretical framework makes several predictions, some of which can be verified by the existing data, others require further experiments. Such framework should allow modeling the function of neuronal circuits without necessarily measuring all the microscopic biophysical parameters, as well as facilitate the design of neuromorphic electronics.