We featured L1 Homotopy: A MATLAB Toolbox for Homotopy Algorithms in L1 Norm Minimization Problems before but it has now been updated to version 2.0 to deal with streaming measurements. 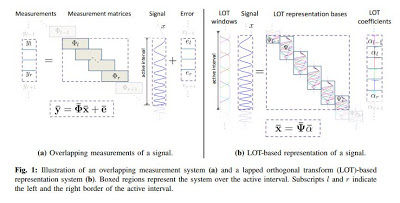 Most of the existing methods for sparse signal recovery assume a static system: the unknown signal is a ﬁnite-length vector for which a ﬁxed set of linear measurements and a sparse representation basis are available and an `1-norm minimization program is solved for the reconstruction. However, the same representation and reconstruction framework is not readily applicable in a streaming system: the unknown signal changes over time, and it is measured and reconstructed sequentially over small time intervals. A streaming framework for the reconstruction is particularly desired when dividing a streaming signal into disjoint blocks and processing each block independently is either infeasible or inefﬁcient.In this paper, we discuss two such streaming systems and a homotopy-based algorithm for quickly solving the associated weighted `1-norm minimization programs: 1) Recovery of a smooth, time-varying signal for which, instead of using block transforms, we use lapped orthogonal transforms for sparse representation. 2) Recovery of a sparse, time-varying signal that follows a linear dynamic model. For both the systems, we iteratively process measurements over a sliding interval and solve a weighted `1-norm minimization problem for estimating sparse coefﬁcients. Since we estimate overlapping portions of the streaming signal while adding and removing measurements, instead of solving a new `1 program from scratch at every iteration, we use an available signal estimate as a starting point in a homotopy formulation. Starting with a warm-start vector, our homotopy algorithm updates the solution in a small number of computationally inexpensive homotopy steps as the system changes. The homotopy algorithm presented in this paper is highly versatile as it can update the solution for the l_1 problem in a number of dynamical settings. We demonstrate with numerical experiments that our proposed streaming recovery framework outperforms the methods that represent and reconstruct a signal as independent, disjoint blocks, in terms of quality of reconstruction, and that our proposed homotopy-based updating scheme outperforms current state-of-the-art solvers in terms of the computation time and complexity.


Implementation is available from Salman's homotopy website (and GitHub)