It's been on Arxiv for a little while but due to Arxiv search feature not working optimally I have had some late delivery. Anyway, here is a single pixel camera using compressive sensing for the masses. No need for external and coded illumination, just need an LCD and knowledge of what you're talking about. And yes some people could argue that this is not lensless system , just a different type of lens but this is outstanding especially in view of the reconstructions! Evidently, the generalization are multiple include different view points (3D) as well as different colors in the visible spectrum, etc....Maybe it's time to build one for a dog and pony show for the Paris meetups. The LCD plays a 0-1 mask which means this is a simple coded aperture problem, I wonder if there is a way to make that set-up much more interesting (the answer is yes and beyond the multiview proposed in the paper) TBC.... 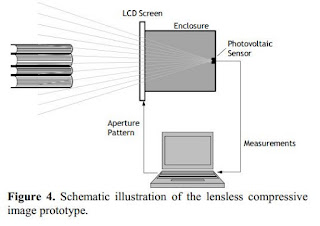 In this paper, we propose a lensless compressive imaging architecture. The architecture consists of two components, an aperture assembly and a sensor. No lens is used. The aperture assembly consists of a two dimensional array of aperture elements. The transmittance of each aperture element is independently controllable. The sensor is a single detection element. A compressive sensing matrix is implemented by adjusting the transmittance of the individual aperture elements according to the values of the sensing matrix. The proposed architecture is simple and reliable because no lens is used. The architecture can be used for capturing images of visible and other spectra such as infrared, or millimeter waves, in surveillance applications for detecting anomalies or extracting features such as speed of moving objects. Multiple sensors may be used with a single aperture assembly to capture multi-view images simultaneously. A prototype was built by using a LCD panel and a photoelectric sensor for capturing images of visible spectrum. 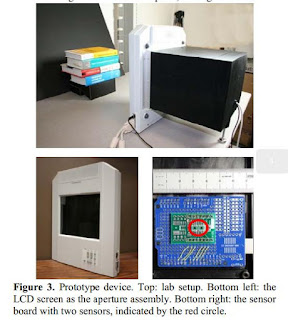