Around the blogs in 80 summer hours

It's mostly a hardware hacking edition today. Compressive sensing has opened up a whole area of phase space where we can experiment new concepts. It is therefore important to also follow any of the rapid prototyping technologies that can help make some of the CS hardware a reality. The video at the top shows quite clearly that one can do something better than the raster mode for back-scatter X-ray, but I ain't gonna try it, no sir:-).

Thanks to silicon being cheaper, some of the miicrontrollers out there are getting to be very interesting. Case in point, I went to a Meet Up yesterday on the Flyport Platform and how it can be integrated in a number of interesting projects. It was organized by G-Media one of the company that distributes this hardware in France. Anyway, for those of you reading this blog, my interest stems from the rapid prototyping capability that this hardware can offer. I was not disappointed. They provided some small workshops around three project. The first one was a small weather station that I mentioned earlier. It looked deceptively simple to set up (no soldering required). Next there was a workshop on how Flyport could be communicating with the Enocean line of product. Again, no soldering and the ability to be in touch with hardware that are using their environment to harvest energy (the sensors do not require batteries). The three energy harvesting technologies rely on solar but also motion, and finally on the Peltier effect.. I wonder when somebody is goign to come up with a pressure harvesting technology. Finally, they sell a wifi card that can interface with the NXT Mindstorm robot.so you could (and we did) move the robot with any smartphone as the robot now becomes a webserver. More information can be found here. The other news was that OpenPicus now offers a Flyport GPRS/3G so that you really prototype hardware that can go a long way (and no soldering). wow.just wow.

I kept on asking about low resolution cameras that one could hook up to a microcontroller, evidently, I got many blank stare but I am accustomed to them :) There is the possibility of using three photodiodes at most on these boards, so we had have to drive some sort of modulator to have some CS camera, meh, I think we can do better than that.. They also mentioned a Geiger Counter project. Having two of those and one could start doing some muon tomography !

For those of you who read French, the presentation is here. Going back to the other blogs we generally cover: 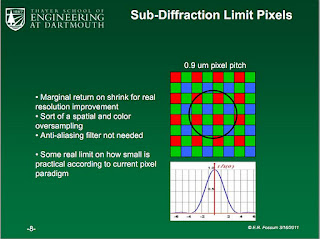 Vladimir let us know that the inventor of the Bayer filter, Bryce Bayer, has died. If you recall this entry, you'll notice that as CMOS is getting smaller, the Bayer pattern is becoming a mixing pattern thanks to the diffraction limit. If there is mixing, compressive sensing techniques are not far.


On the more "theoretical" side of things:
Danny has some interesting Miscellaneous updates
Bob  talks about the general inverse problem with MAP estimation and continues his investigation in Music genre recognition with compressive sampling, pt. 2
MathBlogging features a new Mathematical Instruments: Peter Cameron’s Blog
Larry has a guest post: The Density Cluster Tree: A Guest Post
Christian talks about MCMC convergence assessment
Alex has a list of γ2 norm problems
Terry talks about The closed graph theorem in various categories


Finally, the NYT had a piece on Deep Learning, Yann Le Cun will be on NPR tomorrow. From the Compressive Sensing standpoint, Deep Learning is really just one way to produce better dictionary learning.

Liked this entry ? subscribe to Nuit Blanche's feed, there's more where that came from. You can also subscribe to Nuit Blanche by Email, explore the Big Picture in Compressive Sensing or the Matrix Factorization Jungle and join the conversations on compressive sensing, advanced matrix factorization and calibration issues on Linkedin.
By Igor at 11/28/2012 10:56:00 AM