Last year, I wondered publicly how fast they'll join our side of the Force... the "they" referred to the folks behind the fantastic infrastructure of the internet and scientific progress in the past 30 years i.e. the people behind the Numerical Linear Algebra  packages called( LAPACK/LINPACK/EISPACK).  Like everybody else who can reasonably look into the future ( see Predicting the Future: The Steamrollers and Predicting the Future: Randomness and Parsimony) they and others are coming to the realization that randomization is important as problem sizes are becoming huge as opposed to just large. If you really want to know more about the subject, I invite you to read about Streaming Data Mining. In the meantime, there is growing crowd of folks who want to make this subject more widespread. I suggested naming this RP-Lapack a long while back, but it looks like we have a better contender in RandNLA from the people actually doing the work :-) Haim Avron, being one of them, just sent me the following announcement (the synopsis is very telling)

Thanks for your recent publicity of Blendenpik.
I am organizing with Christos Boutsidis and Petros Drineas a one day workshop on randomized algorithms in numerical linear algebra. I am attaching the announcement. More information, including the list of confirmed speakers and abstracts can be found at http://www.cs.rpi.edu/~drinep/RandNLA/. Would it be possible to post the announcement on your blog?
Thanks in advance,
Haim Avron

Sure  Haim, Here is the announcement:

Workshop on "Randomized Numerical Linear Algebra (RandNLA): Theory and Practice"
(Under the auspices of FOCS 2012, the 53rd Annual IEEE Symposium on Foundations of Computer Science)
Hyatt Regency, New Brunswick NJ, USA
October 20, 2012
Synopsis
Matrix algorithms are the foundation for many methods in data analysis, scientific computing, and engineering applications, and Numerical Linear Algebra (NLA) is the key discipline enabling the analysis and implementation of such algorithms. Without highly efficient and scalable NLA algorithms, the challenge of big data will not be met. To meet this challenge a true boost in performance is neccessary, and that necessitates new algorithmic paradigms to be developed, analyzed, and deployed. Randomization is one of only a handful of paradigms that have the potential to deliver the desired true boost in performance. In the past, scientists and application users were distrustful and shied away from randomized numerical linear algebra algorithms, because (i) their output is unpredictable, (ii) it may not be reproducible, (iii) the error analysis is probabilistic, and (iv) the obtained accuracy is very crude. However, the NLA community is now seriously considering the use of "radical" ideas like randomization, and, indeed, recent years saw much research on randomized numerical linear algebra algorithms.
These practical developments represent huge opportunities for the theoretical computer science community: how can randomization and sampling be leveraged in order to design faster numerical algorithms? The goal of the workshop is to expose the participants to recent progress on developing randomized numerical linear algebra algorithms, as well as on the application of such algorithms to a variety of disciplines and domains.

More information, including list of confirmed speakers and schedule: http://www.cs.rpi.edu/~drinep/RandNLA 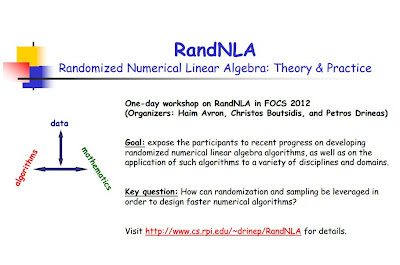