Here is another CS hardware instance:


Passive millimeter-wave (PMMW) imagers using a single radiometer, called single pixel imagers, employ raster scanning to produce images. A serious drawback of such a single pixel imaging system is the long acquisition time needed to produce a high-fidelity image, arising from two factors: (a) the time to scan the whole scene pixel by pixel and (b) the integration time for each pixel to achieve adequate signal to noise ratio. Recently, compressive sensing (CS) has been developed for single-pixel optical cameras to significantly reduce the imaging time and at the same time produce high-fidelity images by exploiting the sparsity of the data in some transform domain. While the efficacy of CS has been established for single-pixel optical systems, its application to PMMW imaging is not straightforward due to its (a) longer wavelength by three to four orders of magnitude that suffers high diffraction losses at finite size spatial waveform modulators and (b) weaker radiation intensity, for example, by eight orders of magnitude less than that of infrared. We present the development and implementation of a CS technique for PMMW imagers and shows a factor-of-ten increase in imaging speed. 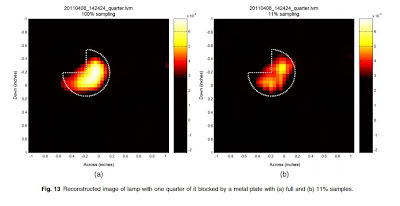 There is another similar paper here: behind a paywall:

In this paper, we briefly describe a single detector passive millimeter-wave imaging system, which has been previously presented. The system uses a cyclic sensing matrix to acquire incoherent measurements of the observed scene and then reconstructs the image using a Bayesian approach. The cyclic nature of the sensing matrix allows for the design of a single unified and compact mask that provides all the required random masks in a convenient way, such that no mechanical mask exchange is needed. Based on this setup, we primarily propose the optimal adaptive selection of sampling submasks out of the full cyclic mask to obtain improved reconstruction results. The reconstructed images show the feasibility of the imaging system as well as its improved performance through the proposed sampling scheme.

Just a quick note that the link given for the first paper seems to be down. SPIE has a digital version: