The first paper demonstrate the performance gains of a group penalty method compared to the lasso, while the other describes in detail an algorithm focused on finding a sparse solution to a system of quadratic equations for an superresolution imaging system. wow.
Convex Approaches to Model Wavelet Sparsity Patterns by Nikhil S Rao, Robert D. Nowak, Stephen J. Wright, Nick G. Kingsbury. The abstract reads:

Statistical dependencies among wavelet coefficients are commonly represented by graphical models such as hidden Markov trees(HMTs). However, in linear inverse problems such as deconvolution, tomography, and compressed sensing, the presence of a sensing or observation matrix produces a linear mixing of the simple Markovian dependency structure. This leads to reconstruction problems that are non-convex optimizations. Past work has dealt with this issue by resorting to greedy or suboptimal iterative reconstruction methods. In this paper, we propose new modeling approaches based on group-sparsity penalties that leads to convex optimizations that can be solved exactly and efficiently. We show that the methods we develop perform significantly better in deconvolution and compressed sensing applications, while being as computationally efficient as standard coefficient-wise approaches such as lasso. 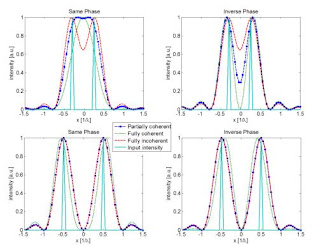 We demonstrate that sub-wavelength optical images borne on partially-spatially-incoherent light can be recovered, from their far-field or from the blurred image, given the prior knowledge that the image is sparse, and only that. The reconstruction method relies on the recently demonstrated sparsity-based sub-wavelength imaging. However, for partially-spatially-incoherent light, the relation between the measurements and the image is quadratic, yielding non-convex measurement equations that do not conform to previously used techniques. Consequently, we demonstrate new algorithmic methodology, referred to as quadratic compressed sensing, which can be applied to a range of other problems involving information recovery from partial correlation measurements, including when the correlation function has local dependencies. Specifically for microscopy, this method can be readily extended to white light microscopes with the additional knowledge of the light source spectrum.