Space: What is it good for ? ( Please Draw Me a Satellite Phone )

You are in the middle of nowhere, how can you let somebody know where you are ? Here is a recipe:
The recipe can help an Aid Worker or several astronauts lost because of the (recent) near catastrophic behavior of their recovery capsule landing them 400 km where they were supposed to land: 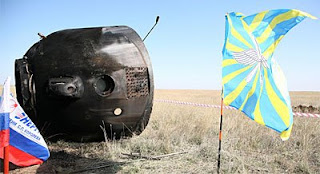 Local herdsmen were milling around the downed vehicle, but there were no signs of the three crew members. Rescuers feared the worst....Then the crew commander phoned home (all spacecraft communications systems had failed) by using a reserve satellite phone installed for just such an emergency. All the crew members were fine, he reported, and were awaiting the recovery helicopters. The herdsmen had quickly arrived and eagerly helped the crew out of the singed, sideways-leaning cabin. The unofficial rescuers had lain the three exhausted, weakened fliers in the shade of the spacecraft and had gone back inside to retrieve the satellite phone for them.

There is a distinct Little Prince flavor to this amazing story. One wonders if the herdsmen asked the astronauts to draw them some animals other than Sheeps. At the very least, they had to provide the description of what a satellite phone looks like. I can imagine the scene:
" ...If you please draw me a satellite phone..."
Coming back to Space, NASA has a flash presentation of its spin-offs and if instead of looking at pretty pictures or convincing yourself that space is important because of the technology return on Earth, you want to send your name to the Moon, you can do that here before June 27th, 2008. Since people read this blog in Ulaan Bator and Australia, make that June 26th to be on the safe side....