CS: Compressive Coded Aperture: Can we do this to get 3D information ?

In a previous entry, we could read about the important work in coded aperture imaging by Roummel Marcia and Rebecca Willett who introduced us to Compressive Coded Aperture Superresolution Image Reconstruction. Now the slides are here. I am very visual, so it is really a treat. They do a very good job at showing what they do and how it relates to the past 40 years of coded aperture imaging. They first describe a single aperture camera, or what is known to every five year olds: a pinhole camera. When drilling several holes, the same image gets to overlap over itself and produce a fuzzy image. Drilling more holes bring more light but less focus. Let us note here that the object is supposed to be at infinity. 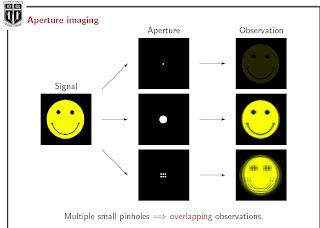 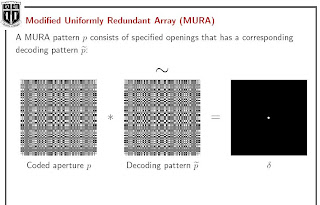 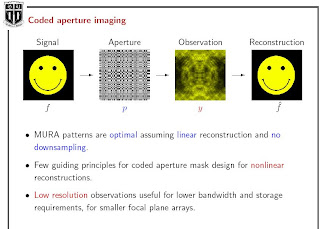 The whole paper and presentation show us how to design a different kind of aperture while taking advantage of the nonlinear reconstruction capabilities available in compressed sensing (here GPSR). 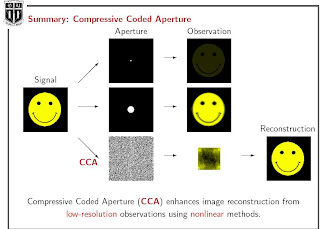 And so what do we do when we are in a close field where every image going through each of the pinhole represents the same scene but viewed from a slightly different angle ?

Well you try to infer 3-d information from one single shot like Ashok Veeraraghavan, Ramesh Raskar, Amit Agrawal, Rama Chellappa, Ankit Mohan and Jack Tumblin do in Non-refractive modulators for encoding and capturing scene appearance and depth. The abstract reads:

We analyze the modulation of a light field via non-refracting attenuators. In the most general case, any desired modulation can be achieved with attenuators having four degrees of freedom in ray-space. We motivate the discussion with a universal 4D ray modulator (ray-filter) which can attenuate the intensity of each ray independently. We describe operation of such a fantasy ray-filter in the context of altering the 4D light field incident on a 2D camera sensor. Ray-filters are difficult to realize in practice but we can achieve reversible encoding for light field capture using patterned attenuating mask. Two mask-based designs are analyzed in this framework. The first design closely mimics the angle-dependent ray-sorting possible with the ray filter.
The second design [17] exploits frequency-domain modulation to achieve a more efficient encoding. We extend these designs for optimal sampling of light field by matching the modulation function to the specific shape of the band-limit frequency transform of light field. We also show how a hand-held version of an attenuator based light field camera can be built using a medium-format digital camera and an inexpensive mask.

Let us note that the full nonlinear reconstruction techniques do not seem to be fully used here and it looks like a whole field of low hanging fruits. This is mostly because the analysis makes no assumption of sparsity on the image taken by the $10,000 camera. However, it looks as though one could use the Fourier mixing or modulation talked about in the article to one's advantage. Let us also note that instead of 3-D information, other types of information could be gathered from nuclear medical imaging systems which also have the same issue of the small distance between the camera and the elements to be imaged.
By Igor at 5/01/2008 10:45:00 AM