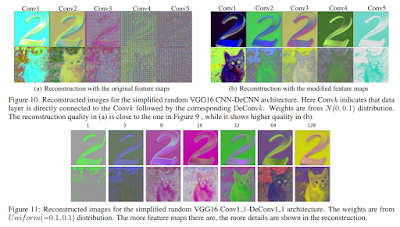 When it comes to random projections and Deep Neural Networks, the paper following paper is intriguing:

In summary, applying random weights in the whole CNNDeCNN architecture, we can still capture the geometric positions and contours of the image. The shape reduction of feature maps takes responsibility for the randomness on the reconstructed images for higher layer representation due to the representation compression. And random weight DeCNN can reconstruct robust images if we have enough number of feature maps

We systematically study the deep representation of random weight CNN (convolutional neural network) using the DeCNN (deconvolutional neural network) architecture. We first fix the weights of an untrained CNN, and for each layer of its feature representation, we train a corresponding DeCNN to reconstruct the input image. As compared with the pre-trained CNN, the DeCNN trained on a random weight CNN can reconstruct images more quickly and accurately, no matter which type of random distribution for the CNN's weights. It reveals that every layer of the random CNN can retain photographically accurate information about the image. We then let the DeCNN be untrained, i.e. the overall CNN-DeCNN architecture uses only random weights. Strikingly, we can reconstruct all position information of the image for low layer representations but the colors change. For high layer representations, we can still capture the rough contours of the image. We also change the number of feature maps and the shape of the feature maps and gain more insight on the random function of the CNN-DeCNN structure. Our work reveals that the purely random CNN-DeCNN architecture substantially contributes to the geometric and photometric invariance due to the intrinsic symmetry and invertible structure, but it discards the colormetric information due to the random projection.