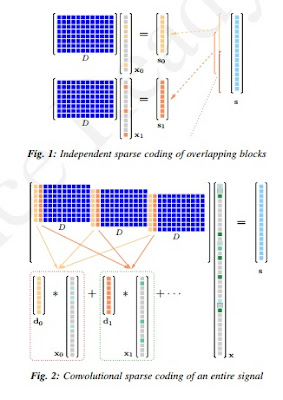 Brendt just sent me the following:

Hi Igor,
I noticed that you maintain an extensive list of software tools for sparse representations and related problems. Could you please add a reference to SPORCO, which is a relatively new library providing algorithms for sparse coding and dictionary learning? It supports standard sparse representations as well as a variety of other problems, including ℓ1-TV and ℓ2-TV regularization and Robust PCA, but the major strength is in algorithms for convolutional sparse coding and dictionary learning (the form of sparse coding inspired by deconvolutional networks).

A Matlab version is available at


but development is now focused on the Python version, available on GitHub at

The Python version features an object-oriented design that allows the existing ADMM algorithms to be extended or modified with limited effort, as described in some detail in paper presented at the recent SciPy conference

Thanks Brendt ! Let me add this to the Advanced Matrix Factorization Jungle page in the coming days. In the meantime, here is the paper:

SPORCO: A Python package for standard and convolutional sparse representations by Brendt Wohlberg

SParse Optimization Research COde (SPORCO) is an open-source Python package for solving optimization problems with sparsity-inducing regularization, consisting primarily of sparse coding and dictionary learning, for both standard and convolutional forms of sparse representation. In the current version, all optimization problems are solved within the Alternating Direction Method of Multipliers (ADMM) framework. SPORCO was developed for applications in signal and image processing, but is also expected to be useful for problems in computer vision, statistics, and machine learning.