On the Expressive Power of Deep Neural Networks

In a Twitter exchange with Mark, Surya mentioned four background papers from his group supporting his ICML presentation last week. Here they are: 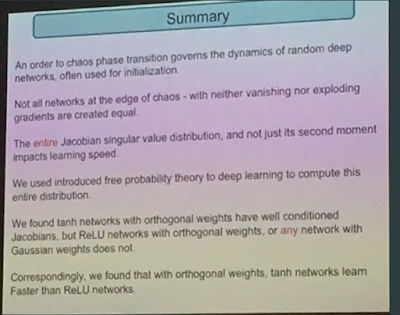 We propose a new approach to the problem of neural network expressivity, which seeks to characterize how structural properties of a neural network family affect the functions it is able to compute. Our approach is based on an interrelated set of measures of expressivity, unified by the novel notion of trajectory length, which measures how the output of a network changes as the input sweeps along a one-dimensional path. Our findings can be summarized as follows:
(1) The complexity of the computed function grows exponentially with depth.
(2) All weights are not equal: trained networks are more sensitive to their lower (initial) layer weights.
(3) Regularizing on trajectory length (trajectory regularization) is a simpler alternative to batch normalization, with the same performance.

We study the behavior of untrained neural networks whose weights and biases are randomly distributed using mean field theory. We show the existence of depth scales that naturally limit the maximum depth of signal propagation through these random networks. Our main practical result is to show that random networks may be trained precisely when information can travel through them. Thus, the depth scales that we identify provide bounds on how deep a network may be trained for a specific choice of hyperparameters. As a corollary to this, we argue that in networks at the edge of chaos, one of these depth scales diverges. Thus arbitrarily deep networks may be trained only sufficiently close to criticality. We show that the presence of dropout destroys the order-to-chaos critical point and therefore strongly limits the maximum trainable depth for random networks. Finally, we develop a mean field theory for backpropagation and we show that the ordered and chaotic phases correspond to regions of vanishing and exploding gradient respectively.

We combine Riemannian geometry with the mean field theory of high dimensional chaos to study the nature of signal propagation in generic, deep neural networks with random weights. Our results reveal an order-to-chaos expressivity phase transition, with networks in the chaotic phase computing nonlinear functions whose global curvature grows exponentially with depth but not width. We prove this generic class of deep random functions cannot be efficiently computed by any shallow network, going beyond prior work restricted to the analysis of single functions. Moreover, we formalize and quantitatively demonstrate the long conjectured idea that deep networks can disentangle highly curved manifolds in input space into flat manifolds in hidden space. Our theoretical analysis of the expressive power of deep networks broadly applies to arbitrary nonlinearities, and provides a quantitative underpinning for previously abstract notions about the geometry of deep functions.

Despite the widespread practical success of deep learning methods, our theoretical understanding of the dynamics of learning in deep neural networks remains quite sparse. We attempt to bridge the gap between the theory and practice of deep learning by systematically analyzing learning dynamics for the restricted case of deep linear neural networks. Despite the linearity of their input-output map, such networks have nonlinear gradient descent dynamics on weights that change with the addition of each new hidden layer. We show that deep linear networks exhibit nonlinear learning phenomena similar to those seen in simulations of nonlinear networks, including long plateaus followed by rapid transitions to lower error solutions, and faster convergence from greedy unsupervised pretraining initial conditions than from random initial conditions. We provide an analytical description of these phenomena by finding new exact solutions to the nonlinear dynamics of deep learning. Our theoretical analysis also reveals the surprising finding that as the depth of a network approaches infinity, learning speed can nevertheless remain finite: for a special class of initial conditions on the weights, very deep networks incur only a finite, depth independent, delay in learning speed relative to shallow networks. We show that, under certain conditions on the training data, unsupervised pretraining can find this special class of initial conditions, while scaled random Gaussian initializations cannot. We further exhibit a new class of random orthogonal initial conditions on weights that, like unsupervised pre-training, enjoys depth independent learning times. We further show that these initial conditions also lead to faithful propagation of gradients even in deep nonlinear networks, as long as they operate in a special regime known as the edge of chaos.