Of Li-Ion Batteries and Biochemical networks: Finding a Low Dimensional Models in Haystacks

About four years ago (Sunday Morning Insight: The extreme paucity of tools for blind deconvolution of biochemical networks ) , we wondered about the paucity of tools that performed model discovery. Since then, we had a few Blind Deconvolution tools using the low dimensionality of the underlying models.
Similarly, a year ago we saw an interest in Uncertainty Quantification of Lithium-ion Batteries but wondered how to go about finding a parameter phase space of interest. The next two preprints address these two problems by finding low dimensional models and phase space within a very large number of possibilities. 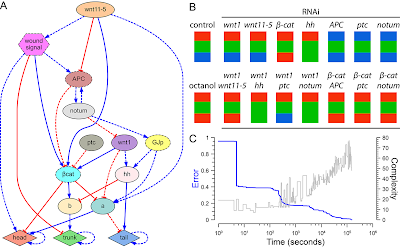 
Transformative applications in biomedicine require the discovery of complex regulatory networks that explain the development and regeneration of anatomical structures, and reveal what external signals will trigger desired changes of large-scale pattern. Despite recent advances in bioinformatics, extracting mechanistic pathway models from experimental morphological data is a key open challenge that has resisted automation. The fundamental difficulty of manually predicting emergent behavior of even simple networks has limited the models invented by human scientists to pathway diagrams that show necessary subunit interactions but do not reveal the dynamics that are sufficient for complex, self-regulating pattern to emerge. To finally bridge the gap between high-resolution genetic data and the ability to understand and control patterning, it is critical to develop computational tools to efficiently extract regulatory pathways from the resultant experimental shape phenotypes. For example, planarian regeneration has been studied for over a century, but despite increasing insight into the pathways that control its stem cells, no constructive, mechanistic model has yet been found by human scientists that explains more than one or two key features of its remarkable ability to regenerate its correct anatomical pattern after drastic perturbations. We present a method to infer the molecular products, topology, and spatial and temporal non-linear dynamics of regulatory networks recapitulating in silico the rich dataset of morphological phenotypes resulting from genetic, surgical, and pharmacological experiments. We demonstrated our approach by inferring complete regulatory networks explaining the outcomes of the main functional regeneration experiments in the planarian literature; By analyzing all the datasets together, our system inferred the first systems-biology comprehensive dynamical model explaining patterning in planarian regeneration. This method provides an automated, highly generalizable framework for identifying the underlying control mechanisms responsible for the dynamic regulation of growth and form.

Developmental and regenerative biology experiments are producing a huge number of morphological phenotypes from functional perturbation experiments. However, existing pathway models do not generally explain the dynamic regulation of anatomical shape due to the difficulty of inferring and testing non-linear regulatory networks responsible for appropriate form, shape, and pattern. We present a method that automates the discovery and testing of regulatory networks explaining morphological outcomes directly from the resultant phenotypes, producing network models as testable hypotheses explaining regeneration data. Our system integrates a formalization of the published results in planarian regeneration, an in silico simulator in which the patterning properties of regulatory networks can be quantitatively tested in a regeneration assay, and a machine learning module that evolves networks whose behavior in this assay optimally matches the database of planarian results. We applied our method to explain the key experiments in planarian regeneration, and discovered the first comprehensive model of anterior-posterior patterning in planaria under surgical, pharmacological, and genetic manipulations. Beyond the planarian data, our approach is readily generalizable to facilitate the discovery of testable regulatory networks in developmental biology and biomedicine, and represents the first developmental model discovered de novo from morphological outcomes by an automated system.


Renewable energy researchers use computer simulation to aid the design of lithium ion storage devices. The underlying models contain several physical input parameters that affect model predictions. Effective design and analysis must understand the sensitivity of model predictions to changes in model parameters, but global sensitivity analyses become increasingly challenging as the number of input parameters increases. Active subspaces are part of an emerging set of tools to reveal and exploit low-dimensional structures in the map from high-dimensional inputs to model outputs. We extend a linear model-based heuristic for active subspace discovery to time-dependent processes and apply the resulting technique to a lithium ion battery model. The results reveal low-dimensional structure that a designer may exploit to efficiently study the relationship between parameters and predictions.