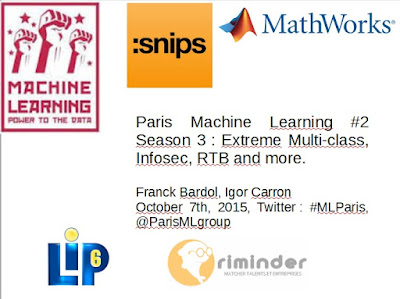 
Video of the streaming (sound is not optimal, same video as above but from a different angle)


Le meetup will be taking place at SNIPS and will be sponsored by Mathworks. Un grand merci à eux ! We will start at 19h15 Paris time.
Right now the program is as follows:

The PRISMA package ( http://cran.r-project.org/web/packages/PRISMA/index.html) is capable of loading and processing huge text corpora processed with the sally toolbox (http://www.mlsec.org/sally/). sally acts as a very fast preprocessor
which splits the text files into tokens or n-grams. Today , with the deployement of specially honeypots , we can work with PRISMA to implement a protocol inspection and state analysis method . And in combination with sally toolbox , we can provide a more deeper analysis

"I would like to present Riminder.net, a startup that I launched during my gap year in 2013-2014 with a deep belief that there are patterns to be discovered and used to improve Employment and Education. At Riminder we believe that Artificial Intelligence is the key to achieve that goal.

Today we are proud to have 200+ companies using Riminder​, a robot which analyzes the recruiter’s habits and the job seekers' CV to enable faster and better quality recruitment.

On 1st September 2015 we released our own artificially intelligent personal digital assistant : Jarvis (Just A Rather Very Intelligent System).
This new Question Answering machine system answers two of our main aspirations :
- Enable the job seekers a more ubiquitous access to information.
- Design and build software that is smart and fun !

The team is based in Paris and supported by some of the most iconic professors and technology entrepreneurs from Ecole Centrale Paris and Ecole Normale Supérieure.

Liked this entry ? subscribe to Nuit Blanche's feed, there's more where that came from. You can also subscribe to Nuit Blanche by Email, explore the Big Picture in Compressive Sensing or the Matrix Factorization Jungle and join the conversations on compressive sensing, advanced matrix factorization and calibration issues on Linkedin.
By Igor at 10/07/2015 12:00:00 AM