SLOPE is Adaptive to Unknown Sparsity and Asymptotically Minimax - implementation - 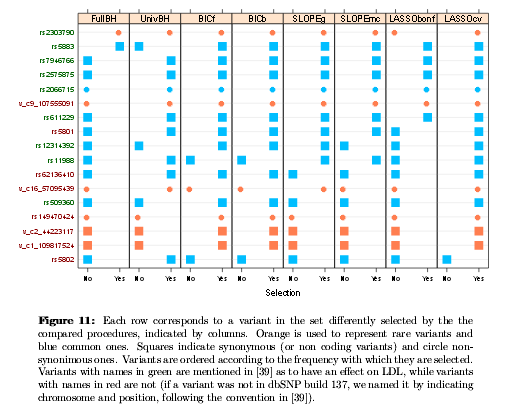 
We consider high-dimensional sparse regression problems in which we observe $y = X \beta + z$, where $X$ is an $n \times p$ design matrix and $z$ is an $n$-dimensional vector of independent Gaussian errors, each with variance $\sigma^2$. Our focus is on the recently introduced SLOPE estimator (Bogdan et al., 2014), which regularizes the least-squares estimates with the rank-dependent penalty $\sum_{1 \le i \le p} \lambda_i |\hat \beta|_{(i)}$, where $|\hat \beta|_{(i)}$ is the $i$th largest magnitude of the fitted coefficients. Under Gaussian designs, where the entries of $X$ are i.i.d. $\mathcal{N}(0, 1/n)$, we show that SLOPE, with weights $\lambda_i$ just about equal to $\sigma \cdot \Phi^{-1}(1-iq/(2p))$ ($\Phi^{-1}(\alpha)$ is the $\alpha$th quantile of a standard normal and $q$ is a fixed number in $(0,1)$) achieves a squared error of estimation obeying \[ \sup_{\|\beta\|_0 \le k} \,\, \mathbb{P}\left(\| \hat\beta_{SLOPE} - \beta \|^2 > (1+\epsilon) \, 2\sigma^2 k \log(p/k) \right) \longrightarrow 0 \] as the dimension $p$ increases to $\infty$, and where $\epsilon > 0$ is an arbitrary small constant. This holds under weak assumptions on the sparsity level $k$ and is sharp in the sense that this is the best possible error {\em any} estimator can achieve. A remarkable feature is that SLOPE does not require any knowledge of the degree of sparsity, and yet automatically adapts to yield optimal total squared errors over a wide range of sparsity classes. We are not aware of any other estimator with this property.

Code and data are available from the paper's webpage.
Join the CompressiveSensing subreddit or the Google+ Community and post there !