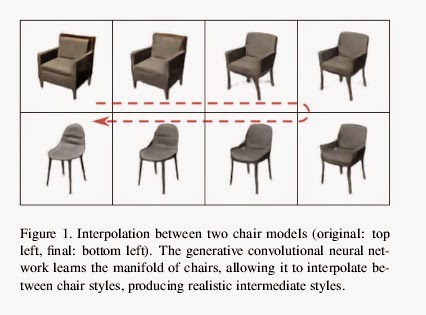 It started with a tweet and is a good conversation starter for a Friday afternoon's Hamming's time.

and then the rest of the conversation followed.

We train a generative convolutional neural network which is able to generate images of objects given object type, viewpoint, and color. We train the network in a supervised manner on a dataset of rendered 3D chair models. Our experiments show that the network does not merely learn all images by heart, but rather finds a meaningful representation of a 3D chair model allowing it to assess the similarity of different chairs, interpolate between given viewpoints to generate the missing ones, or invent new chair styles by interpolating between chairs from the training set. We show that the network can be used to find correspondences between different chairs from the dataset, outperforming existing approaches on this task.

Most modern convolutional neural networks (CNNs) used for object recognition are built using the same principles: Alternating convolution and max-pooling layers followed by a small number of fully connected layers. We re-evaluate the state of the art for object recognition from small images with convolutional networks, questioning the necessity of different components in the pipeline. We find that max-pooling can simply be replaced by a convolutional layer with increased stride without loss in accuracy on several image recognition benchmarks. Following this finding -- and building on other recent work for finding simple network structures -- we propose a new architecture that consists solely of convolutional layers and yields competitive or state of the art performance on several object recognition datasets (CIFAR-10, CIFAR-100, ImageNet). To analyze the network we introduce a new variant of the "deconvolution approach" for visualizing features learned by CNNs, which can be applied to a broader range of network structures than existing approaches.

This paper presents the Deep Convolution Inverse Graphics Network (DC-IGN) that aims to learn an interpretable representation of images that is disentangled with respect to various transformations such as object out-of-plane rotations, lighting variations, and texture. The DC-IGN model is composed of multiple layers of convolution and de-convolution operators and is trained using the Stochastic Gradient Variational Bayes (SGVB) algorithm. We propose training procedures to encourage neurons in the graphics code layer to have semantic meaning and force each group to distinctly represent a specific transformation (pose,light,texture,shape etc.). Given a static face image, our model can re-generate the input image with different pose, lighting or even texture and shape variations from the base face. We present qualitative and quantitative results of the model's efficacy to learn a 3D rendering engine. Moreover, we also utilize the learnt representation for two important visual recognition tasks: (1) an invariant face recognition task and (2) using the representation as a summary statistic for generative modeling.

You may also be interested in generative models like deep belief nets that have also incorporated the convolution operator. See, for instance, http://ai.stanford.edu/~ang/papers/icml09-ConvolutionalDeepBeliefNetworks.pdf

And then, there are papers on visualizing the features at high level CNN layers in the image space, which also have to deal with some similar problems when "reversing" the high-level neural net representation:
http://ftp.cs.nyu.edu/~fergus/papers/zeilerECCV2014.pdf