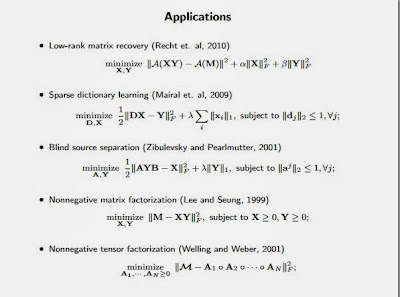 Here are some important implementations I should have featured a long time ago from Yangyang Xu and Wotao Yin. From the page:

The block-coordinate update (BCU) method is a generalization to the following classic methods:
BCU solves the problem in the form of

by updating just one or a few blocks of variables at a time, rather than updating all the blocks together (the batch update). The order of update can be deterministic or stochastic. The deterministic orders can be eithr cyclic or greedy according to a certain rank.
The main advantage is that updating one or just a few blocks of variables are computationally much cheaper than the batch update. On the other hand, convergence requires more stringent conditions and typically takes more iterations.
The update applied to each block can be exact minimization over the block or take different forms of inexact updates such as
There is a tradeoff between the per-update complexity and the progress of overall minimization.

Motivation and the Proposed Method

It is challenging to establish the global convergence of BCU for optimization problems that are nonconvex and/or nonsmooth. In general, either nonconvexity or nonsmoothness can cause BCU to stagnate at a non-stationary point.
To establish global convergence, we assume a block multi-convex structure, namely, the feasible set and objective function are convex in each block of variables (but not jointly convex in general). Nonsmoothness is permitted within each block. Many interesting applications have this structure; see below. We propose a BCU algorithm with three different block-update schemes; the choice for each block is independent of others. Under certain conditions, we show that any limit point satisfies the Nash equilibrium conditions (a generalization to stationarity). Furthermore, global convergence and asymptotic convergence rate are established for problems obeying the Kurdyka-Lojasiewicz inequality.

Liked this entry ? subscribe to Nuit Blanche's feed, there's more where that came from. You can also subscribe to Nuit Blanche by Email, explore the Big Picture in Compressive Sensing or the Matrix Factorization Jungle and join the conversations on compressive sensing, advanced matrix factorization and calibration issues on Linkedin.
By Igor at 11/07/2013 12:00:00 AM