In the case where radiation does not suffer much scattering, the principle of Coded Aperture used for light can be directly applied to these radiation fields. Berthold Horn, Richard Lanza, Roberto Accorsi,
Klaus Ziock, and Lorenzo Fabris at MIT have been following this principle to do imaging by performing Computational Imaging. As pointed out before, Coded Aperture is also what the DISP group does at Duke University (but with radiation that are in the visible range). The big difference resides in the Mask, in radiation with smaller wavelengths (X-rays,...), radiation goes through the mask, but more generally you cannot guide the radiation to your detector and so it becomes a little bit more complex. Spatial resolution is extremely difficult to do because the detector are expensive and need to be where the radiation goes. 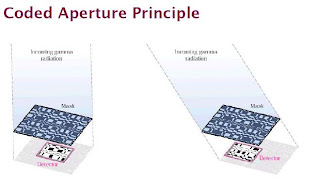 So one has to resort to batteries of detectors such as the ones below. 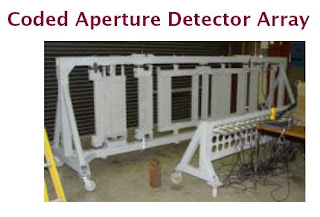 In order to provide spatial resolution, one has to either to have many detectors or move the detector or the source as can be seen in this animation (“Synthetic Aperture” radiography). An introduction to instrumentation using coded aperture for astronomy can be found here. This is a great introduction to the subject, especially in regards to the current inversion techniques.

When one deals with radiation scattering (neutrons in nuclear reactor cores or infra-red/visible light in tissues) , radiation sensors have a much more difficult kernel to invert (because the diffusion/scattering of the rays in matter) and requires methods like Bayesian Compressed Sensing (i.e. In-situ detector of Lawrence Carin, Dehong Liu, and Ya Xue at Duke University). All in all, it looks like some of these techniques for Coded Aperture could be improved at the software and hardware level using Compressed Sensing.
By Igor at 10/27/2007 02:40:00 AM