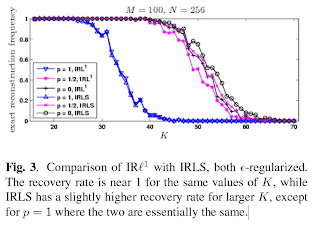 In a previous entry, I mentioned the impressive improvement of the L1 reconstruction capability for signals that were not so sparse. We also knew that an Lp (p less than 1) exact reconstruction of sparse signals via nonconvex minimization was also possible.

Based on the work of Bhaskar Rao and Kenneth Kreutz-Delgado [2], Rick Chartrand and Wotao Yin produced an astounding reconstruction technique in this article [2]:

The theory of compressive sensing has shown that sparse signals can be reconstructed exactly from remarkably few measurements. In [1], it was shown empirically that using Lp minimization with p less than 1 can do so with fewer measurements than with p = 1. In this paper we consider the use of iteratively reweighted algorithms for computing local minima of the nonconvex problem. In particular, a particular regularization strategy is found to greatly improve the ability of a reweighted least-squares algorithm to recover sparse signals, with exact recovery being observed for signals that are much less sparse than required by an unregularized version (such as FOCUSS, [2]). Improvements are also observed for the reweighted-l1 approach of [3].

Why is this is an important paper ? Because there is

The major feature of this paper is showing that $\epsilon$ should probably be not that small in the first place. Let us hope that this heuristic will be proven in the future. In order to understand the graph above, one needs to know the acronyms:

K stands for the sparsity number of the signal, M is the number of measurements and N is the signal size.