Sunday Morning Insight: How can you tell the world is changing right before your eyes ?

Gene Kogan, an artist who presented an awesome talk at the Paris Machine Learning meetup this past week, writes a book on Machine Learning for artists. This, by itself, is unusual but this is not the most peculiar aspect of the story. Here is a screenshot of Gene's Github 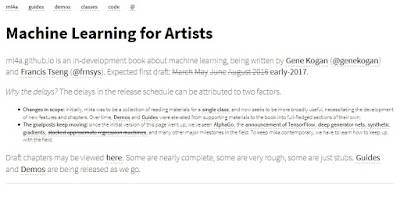 let me actually focus on one particular section of that text

Yes, a paper that was withdrawn from NIPS 2016 is one of these things that delays a book on Machine Learning for Artists. Artists are generally not the intended crowds of ArXiv preprints.

Here a second instance of the future staring at you in the eyes. It came as a tweet from Nick in the British understatement of the year  this week

which led Clive Brown to state

Sequencing used to be about breaking things in small little pieces (100's of bases) and computations were required to put those information back together. Nick just called the reading of a piece with 700 000 bases! Sometimes, sensors can remove the need for computations in a major way.  Check the previous discussions on the subject.
The third item can be found in this paragraph from Google Research blog on a paper titled “Detecting Cancer Metastases on Gigapixel Pathology Images”.

...we showed that it was possible to train a model that either matched or exceeded the performance of a pathologist who had unlimited time to examine the slides....In fact, the prediction heatmaps produced by the algorithm had improved so much that the localization score (FROC) for the algorithm reached 89%, which significantly exceeded the score of 73% for a pathologist with no time constraint2. We were not the only ones to see promising results, as other groups were getting scores as high as 81% with the same dataset. Even more exciting for us was that our model generalized very well, even to images that were acquired from a different hospital using different scanners...

It's one thing to do better than humans, it's another to have a generalization across several different sensors.  That last sentence is a confirmation that the technique isn't just an overfit of sorts.

Fourth item, Yaniv, who's been featured here on Nuit Blanche, (the last time was on Biological screens from linear codes: theory and tools) and Dina Zielinski have been working on using DNA for memory storage purposes.


In summary,
All in a manner of a single week. Welcome to the future, it is staring at you right now. What are you waiting for ?