Toward a unified theory of sparse dimensionality reduction in Euclidean space

So we are now converging toward a theory for using sparse random projections for a variety of problems. 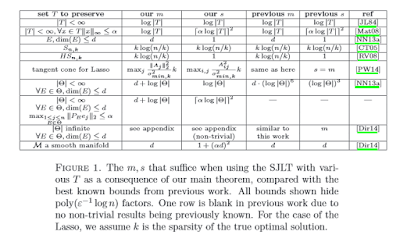 Let be a sparse Johnson-Lindenstrauss transform [KN14] with non-zeroes per column. For a subset of the unit sphere, given, we study settings for required to ensure i.e. so that preserves the norm of every simultaneously and multiplicatively up to . We introduce a new complexity parameter, which depends on the geometry of , and show that it suffices to choose and such that this parameter is small. Our result is a sparse analog of Gordon's theorem, which was concerned with a dense having i.i.d. Gaussian entries. We qualitatively unify several results related to the Johnson-Lindenstrauss lemma, subspace embeddings, and Fourier-based restricted isometries. Our work also implies new results in using the sparse Johnson-Lindenstrauss transform in numerical linear algebra, classical and model-based compressed sensing, manifold learning, and constrained least squares problems such as the Lasso.

h/t Laurent Jacques
Join the CompressiveSensing subreddit or the Google+ Community or the Facebook page and post there !

Email ThisBlogThis!Share to TwitterShare to FacebookShare to Pinterest
labels: CS