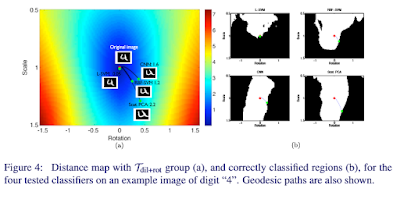 As I was reading about IGO and Emmy Noether's theorem, Hussein just sent me the following:


We recently published with Pascal Frossard a paper that introduces a method to quantify the invariance of arbitrary classifiers to geometric transformations. Our method is based on viewing the set of transformed images as a smooth manifold and define our invariance measure as a well-chosen geodesic distance on that manifold. The paper is on the arXiv http://arxiv.org/abs/1507.06535 and the code is available on the project website https://sites.google.com/site/invmanitest/

If you have comments or questions, please let us know! Thanks,
Hussein.