When dealing with covariance matrices, one always wonder how thresholding coefficients will yield a matrix with similar properties. Today, we have some answers in that area: 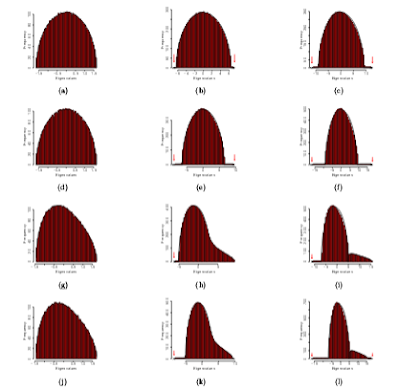 We study the spectra of random matrices with off-diagonal entry equal to , where 's are the rows of a matrix with i.i.d. entries and is a scalar function. It is known that under mild conditions, as and increase proportionally, the empirical spectral measure of converges to a deterministic limit . We prove that if is a polynomial and the distribution of entries of is symmetric and satisfies a general moment bound, then is the sum of two components, the first with spectral norm converging to (the maximum absolute value of the support of ) and the second a perturbation of rank at most two. In certain cases, including when is an odd polynomial function, the perturbation is 0 and the spectral norm converges to . If the entries of are Gaussian, we also prove that converges to for a large class of odd non-polynomial functions . In general, the perturbation may contribute spike eigenvalues to outside of its limiting support, and we conjecture that they have deterministic limiting locations as predicted by a deformed GUE model. Our study of such matrices is motivated by the analysis of statistical thresholding procedures to estimate sparse covariance matrices from multivariate data, and our results imply an asymptotic approximation to the spectral norm error of such procedures when the population covariance is the identity.