Nikhil just let me know of version 2 of his preprint, and the attendant code that goes with it. Let us note, as shown in the figure below, that when it is easy to compute, then the atomic norm does a better job than the nuclear norm relaxation. 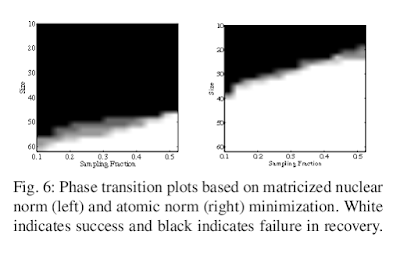 In many signal processing applications, the aim is to reconstruct a signal that has a simple representation with respect to a certain basis or frame. Fundamental elements of the basis known as "atoms" allow us to define "atomic norms" that can be used to formulate convex regularizations for the reconstruction problem. Efficient algorithms are available to solve these formulations in certain special cases, but an approach that works well for general atomic norms, both in terms of speed and reconstruction accuracy, remains to be found. This paper describes an optimization algorithm called CoGEnT that produces solutions with succinct atomic representations for reconstruction problems, generally formulated with atomic-norm constraints. CoGEnT combines a greedy selection scheme based on the conditional gradient approach with a backward (or "truncation") step that exploits the quadratic nature of the objective to reduce the basis size. We establish convergence properties and validate the algorithm via extensive numerical experiments on a suite of signal processing applications. Our algorithm and analysis also allow for inexact forward steps and for occasional enhancements of the current representation to be performed. CoGEnT can outperform the basic conditional gradient method, and indeed many methods that are tailored to specific applications, when the enhancement and truncation steps are defined appropriately. We also introduce several novel applications that are enabled by the atomic-norm framework, including tensor completion, moment problems in signal processing, and graph deconvolution.

The attendant implementation is on Nikhil's code page.
Join the CompressiveSensing subreddit or the Google+ Community or the Facebook page and post there !