As usual on some subject, I am a little late but this is very nice: use the varying shape of a liquid lens and a moving coded aperture in order to produce different measurements in a CS system. 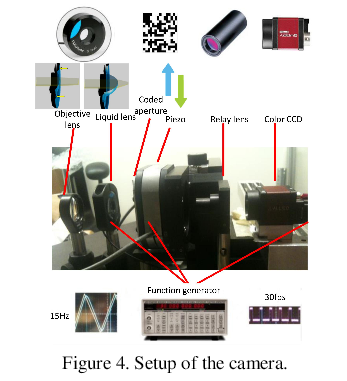 A simple and inexpensive (low-power and low-bandwidth) modification is made to a conventional off-the-shelf color video camera, from which we recover {multiple} color frames for each of the original measured frames, and each of the recovered frames can be focused at a different depth. The recovery of multiple frames for each measured frame is made possible via high-speed coding, manifested via translation of a single coded aperture; the inexpensive translation is constituted by mounting the binary code on a piezoelectric device. To simultaneously recover depth information, a {liquid} lens is modulated at high speed, via a variable voltage. Consequently, during the aforementioned coding process, the liquid lens allows the camera to sweep the focus through multiple depths. In addition to designing and implementing the camera, fast recovery is achieved by an anytime algorithm exploiting the group-sparsity of wavelet/DCT coefficients.